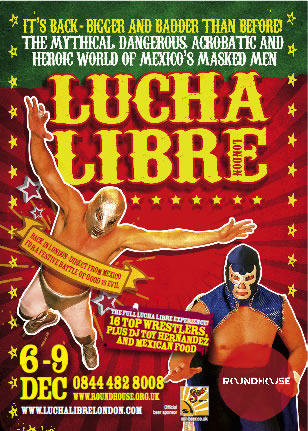 “A spectacle that’s more akin to a rock concert cranked to 11 than your standard British wrestling event. Viva Lucha Libre” Time Out

Now more than ever. We need superheroes.

In its triumphant debut at the Roundhouse this summer Lucha Libre fought for the heart and soul of London – and won hands down. Now we’re back for the rematch – four days of spectacular high-flying, jaw-dropping, ring-grappling, mask-wearing Mexican entertainment that is guaranteed to rock your world this December.

It’s an early festive Luchadrome, featuring the legendary gladiator El Hijo del Santo, whose tecnico side includes the mighty but minimal Mascarita Sagrada as they face the evil side of the rudos, whose leader Blue Demon Jr. is joined by the lonesome and nasty Hijo del Solitario and El Lobo, the mini-troll from Jack Black’s Nacho Libre.

Is it wrestling? Is it theatre? Is it cabaret? Who knows? But it could definitely be the best early Christmas present ever.

Matinee only: up to two children half price when accompanied by full paying adult.

What the media said about Lucha Libre London’s July visit:

“A costume drama for grapple fans.” The Independent
“Forget the bloated perma-mulleted world of WWE wrestling, with its over-hyped contests and staged soap opera theatrics. The most exciting form of the sport on the planet is from Mexico. Where else will you find fighting midgets, feuding transvestites and masked muscle men, all engaging in a ferocious mix of acrobatics and showmanship.” Arena
“The wrestlers – all genuine athletes with some impressively acrobatic moves – seemed to relish the opportunity of showcasing their skills to a new audience, and I for one hope they return to these shores again soon.” The Sun Online
“Muscle men with directional outfits. What could be better?” Gay Times
“It’s always wise to expect the unexpected from The Roundhouse, but this time they’ve surpassed themselves.” Ham & High
“It’s an astonishing feast of laughs and it’s sweeping the planet.” Daily Sport
“An incredible night.” Bizarre
“Pure masters of the Art.” Daily Star
“Ladies and gentlemen, senors and senoritas, the hour of masked phantoms, acrobatic heroics and lycra posturing is upon us! All hail the luchadores!” Camden New Journal