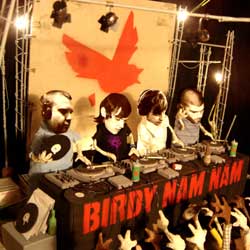 Turntablism is to playing records what Tiger Woods is to golf, or Jimi Hendrix to the electric guitar – creating on a level that leaves mere spinners awestruck. France’s Birdy Nam Nam are amongst the world’s finest exponents and they won the DMC World Team Battle in 2002 to prove it. BNN are Little Mike, DJ Pone, DJ Need and Crazy B. They have been around in the French underground for many years rocking the biggest soirées and backing up illustrious rap outfits.

But mind-boggling, blink-and-you-miss-it artistry is only part of the story – at its zenith turntablism becomes as creative as any virtuoso musician and the deck becomes an instrument in its own right. Found sounds and improvised beats created through imagination and collaboration at the highest level and new music is born.

Alternately gloomy or funky, shot through with electronic acids and methodical cuts, the Birdy Nam Nam sound dispenses with plucking a guitar or crafting a chord on a Rhodes. It’s able to decapitate the trumpets and slash the pianos. Pushing back the limits of that raw material, these merciless crate-diggers deliver considered music, a jewel of vinyl composition that owes as much to DJ Shadow as to Sun Ra, as much to the electronic experts of the 1990s as to the 1980s rap producers. Birdy Nam Nam no longer play records, they play music.

You can get off on Birdy Nam Nam without knowing that all the music you hear was assembled by DJs from mountains of vinyl – but the additional DVD enlightens us about Birdy Nam Nam’s working methods – filmed in situ, in the studio and on the stage and includes live versions of the album tracks and recent unreleased pieces.

PS. Birdy Nam Nam comes from a Peter Sellers line in his 1968 film “The Party”