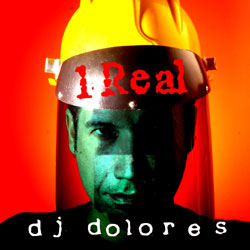 launching both 1 REAL and La Linea ‘08

This is DJ Dolores’ third album, and it sees his multiple talents come to full bloom. Using once again elements of popular music from his native Brazilian Northeast, blended with dancefloor-friendly electronics, horns, and rock & dub influences, he’s created these exhilarating songs which are contagiously joyful, yet based on the observation of a grim political and social subtext.

DJ Dolores found some of his inspiration for 1 Real in the music he heard in Brasília Teimosa, one of Recife’s poor areas, on which his photographer friend Bárbara Wagner was doing a pictorial essay (now published in book form).

Building on these new popular hybrids, he gave them a series of musical twists, with the help of regular collaborators such as Maestro Forró, Gabriel Melo, Fernando Catatau, vocalists Isaar and Maciel Salu, and guest appearances by acclaimed Nordeste fusionist Silvério Pessoa and by Marion, a young, Rio-based French vocalist. The lyrical content goes from harsh social comment to personal, humorous notes on male/female relationships.

The bonus track at the end of 1 Real is DJ Dolores’ contribution to the Danger Global Warming project initiated by the Blacksmoke Organization, an international group of artists, filmmakers, photographers, musicians and actors whose aim is to support environmental causes by propagating audiovisual noise.

For this particular project, they created a track, featuring vocals by The Stranglers’ Hugh Cornwell, and are having it remixed by 50+ artists from all over the world.

“After the extensive touring which followed the release of my two previous albums, I took a long break and ended up rediscovering Recife, my hometown. I spent a lot of time in Brasilia Teimosa, a community of poor fishermen based on the city’s seashore. There, from street vendors’ carts, bootleg CDRs were continuously and powerfully blasting popular urban hit songs. These tracks were generally poorly produced, for a strictly commercial purpose yet they were very representative of the suffering lower classes’ expectations.

It was all there, in those lyrics: stories of love, sex, deceit , cachaça (sugarcane alcohol), and the naive hardness of those who are content with very little. The music is based on traditional rhythms and beefed up by electric guitars, drum machines and lo-fi computer programming. From forró to the music of the Jovem Guarda (the Young Guard of romantic Brasilian rock from the ’60s), everything is incorporated into a format adapted for an audience which hopes to hear its life narrated and encapsulated in a song.

The originality of this re-invention of tradition in Recife’s inner city environment was my main reference while producing this new album. It also certainly gave it its title: “1 Real” refers both to the crude reality exposed in those cheap songs, and to the fact that they’re reproduced on CDRs and sold for a very low price (the Real is Brazil’s national currency) which, unlike anything produced by the traditional music industry, makes them accessible to the underprivileged classes.”

DJ Dolores (aka Helder Aragão) has been active in the ebullient musical scene of his hometown Recife since his collaboration with Mangue Beat originators Chico Science and Nação Zumbi in the late ’80s. He then worked as a graphic designer, TV documentary producer, soundtrack composer for films and theatre before adopting the turntables and sampler as a means of expression. He has remixed tracks for Gilberto Gil, Tribalistas, Fernanda Porto and Taraf de Haïdouks; was invited to take part (alongside David Byrne and the Beastie Boys) in Wired Magazine’s Rip, Mash, Sample, Share project in support of the Creative Commons licenses; wrote and recorded soundtrack music for Brazilian films A Máquina and Narradores de Javé ; and has won several awards in Brazil and abroad (including the 2004 BBC World Music Award, in the ‘club global’ category). His previous albums came out in 2002 ( Contraditório ) and 2005 ( Aparelhagem )

DJ Dolores is definitely at the forefront of a new movement which re-appropriates some of the country’s neglected traditions, especially those popular styles traditionally shunned by the establishment, and brings them to a wider audience, thus bridging the gaps between poor & rich, young & old, and showing that there’s an amazingly rich musical world beyond samba and bossa nova.

Deixa Falar | The title means ‘Let people talk’. Musicians don’t know how to classify their own music and leave this dubious task to marketing managers and journalists. Musicians want to make music and not worry about which bin the record will be placed. So, let the dogs bark while the caravan dances.

Tocando o Terror | ‘Tocar o terror’ is an expression used by criminals in Brazil when talking about exerting pressure through threats of violence, which often happens in a big metropolis like São Paulo or Rio de Janeiro. But in this case I am referring to the emotional disintegration that some girls have the ability to provoke in guys. From my point of view, it’s like Lou Reed’s ‘Femme Fatale’, only that the girl comes from the suburbs of Recife – a beachgoer, bleached hair, a cheap tattoo and a very limited sense of love ethics. I got to the studio with the basic track ready but no idea on how to develop it. Gabriel did a great solo and then it all happened. The voice is Tiné and this is the first time we worked together.

Cala Cala | I’m constantly amazed by that form of conviction which is the hallmark of extreme idealists. The universe surrounding them is hostile to their point of view, and they vehemently attack our world which, in their eyes, seems to be imperfect and in need of transformation. They usually take a radical, arrogant and unshakable stand in fighting against all adversities in their quest to reach future generations. The problem is that without listening to others, they often let their ideals be transformed into totalitarian and fallacious positions.

Proletariado | Very little has changed since the duo of Marx and Engels first described capitalism. The exploitation of human beings in order to accumulate bigger and bigger profits resulted in today’s major abyss between social classes. I wrote this theme during a week when a killing, committed by a minor, sparked off an ill-judged national debate to lower the age of legal responsibility in Brazil so that younger kids could be incarcerated – poor kids, of course! I believe that the problem of violence (not only in Brazil) is related to the lack of opportunities – education and quality of life – for young people, while the social model generates a demented competition which excludes them.

Wakaru | There are many disconnected elements in this song: Caboclinho folk flutes, trance bass lines, a melodious rabeca (violin) and a guy speaking broken Japanese. Did you get it? I didn’t, but would like to…

Shakespeare | Cadão Volpato was one of the best songwriters of the Brazilian rock scene in the ’80s. His cult band Fellini was heard only by a few highly attuned ears. This song was written for his new band Funziona Senza Vapore, after Fellini disbanded, and was originally sung in Portuguese. I love this theme and often wish for a week in limbo. The singer is Marion Del’Eite, a French singer living in Rio de Janeiro.

J.P.S. | This song is an attempt to demonstrate to body builders that words can be as seductive as a beautiful physique. For this I describe Jean-Paul Sartre as an improbable but successful Don Juan. The rhythmic structure travels between forró and dancehall beats, to show the strong connection between Brazil’s northeastern region and Jamaica. Silvério Pessoa, one of the great singers of Recife’s new generation, is singing here.

Flying Horse | There’s a surprising track by Saul Williams in which he uses surf music as a backdrop for his poetry. I wanted to do something similar, but at some point I lost control and the song ended up sounding like an old Brazilian garage-rock band would sound if they already had computers in the 1970s. Music has a life of its own, my friends. I just follow it.

Números | When I started this track, I had an old playful song in mind. It’s called A Velha De Baixo Da Cama (‘The Old Lady Under The Bed’), and keeps adding new characters to verses which get repeated till exhaustion. I’m not sure what happened… Maybe it was the cold, or the solitude in the hills of Campos do Jordão (where I was when I wrote the song), but things ended up resembling some kind of melancholic, sentimental balance sheet.

Mutant Child | Wolverine in Brazil? Yes, there is an adventure of the baddest X-Men that takes place in the Northeast region of Brazil – actually in the small state of Sergipe where I was born. The people in charge of the European edition invited me to create a soundtrack for the cartoon. I’ve tried to recreate the feeling of traveling through the muddy roads of the Northeast.

Saudade is a word which only exists in the Portuguese language. What does it mean? These lyrics try to explain that for those who don’t understand Portuguese (but they’re in Portuguese.). Saudade , along with Mutant Child , were commissioned for a special edition of Wolverine. The vocalist is Maciel Salu.

The Mind Inspector | What’s going on in the other person’s head? Who wouldn’t want to fly freely inside the emotional landscapes of their loved ones and visualize their thoughts? The initial inspiration for this track came from Satie, more precisely from his Trois Gnossiennes .