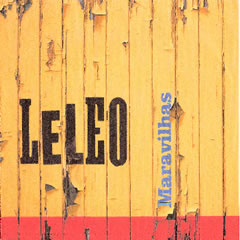 Brazilian chart-topper, Leleo, is set to unleash new album, Maravilhas, on the UK. A star in Brazil since the mid-90’s, Leleo has relocated from tropical Copacabana to topical Camden Town and, in a whirl of dextrous creativity, has been heating up London’s winter audiences at headline shows -both with his solo acoustic gigs and full Brazilian band, Maravilhas, as well as dropping storming Acid Samba DJ sets throughout the capital.

Maravilhas (the album, not to be confused with Leleo’s band of the same name) was written and recorded in Rio’s infamous and glamorous district of Copacabana, and wears its influences on its sleeve. Part tropical paradise, part hedonistic heaven and part edgy backstreets, Maravilhas takes Leleo’s beloved acid samba style and gives it a modern Copacabana makeover, laying down the traditional Brazilian rhythms on a bed of cutting edge beats.

Opener Ela Briga Comigo (She Fights Me) is bursting with urgent energy. Leleo spits out the lyrics as samba tempo and funky chops create a vibe that flows not only through the song but throughout the album, funky and rhythmic, lush and emotive. Motoboy is designed for the dancefloor, all choppy guitar and intelligently utilised electronica, creating a joyous latino anthem. When the pace occasionally slows, the results are equally impressive: Ferias eases off from Ela Briga Comigo’s relentless delivery and finds its groove at a more relaxed pace, providing space for Leleo’s gravel-throated vocal and the uplifting harmonies; while Santa is a rare lighters-in-the-air moment and a song of real beauty.

In 1994, with his old band Banda Bel, Leleo wrote and recorded a song about Romario, the Brazilian star centre-forward of that year’s World Cup squad. Romario loved the song. It shot to number one in the Brazilian charts, becoming the theme tune to the World Cup, leading to Romario joining the band on stage and meeting them on numerous occasions. With this in mind, Leleo wrote Gisele, an ode to Brazilian supermodel Gisele Bündchen.