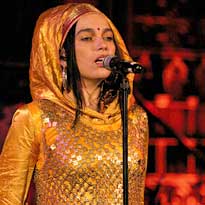 The idea behind “Girando Barí” is to share the fabulous entertaining spirit of Ojos de Brujo. Because the band was formed through live shows, jams and encounters with other artists, the release of this DVD is fully justified. It tells, in a spontaneous way, what the band stands for in 2005. This is what they are, a live act ready to tread its own path with a strong artistic concept.

It’s on stage that Ojos pick up its inspiration and strength and, since 1999, the 10 members have found the right balance between raw energy and sensuality, political statements and party time. The music of Ojos de Brujo is pure emotion, communicative and generous. The musical flow combines with videos, dj scratching, live painting performances and of course the flamenco dancing which is part of the past, and present, of every band member. These elements, added to the percussive base of the “cajon* freaks”, involve the audience in a high energy “fiesta”. 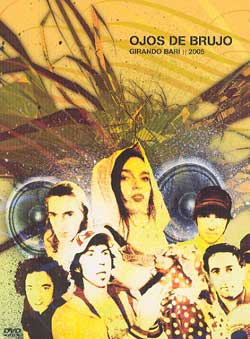 *The Cajon is a percussion instrument introduced into flamenco by Camarón de la Isla and Paco de Lucia.”

Live performance recorded and filmed on November 6, 2004 at Barcelona’s Razzmatazz, combined with footage taken from concerts all over the world between 2003 and 2005. From Sant Adriá in Catalunia to Bogotá, Colombia, Valencia to Croatia, Madrid, Miami, Morocco, Berlin, Grenada, Milan, Budapest, Chicago and back to the Razzmatazz. The most recent footage was shot in Havana in March 2005.

This section includes 2 new songs which will be part of the next Ojos de Brujo album, due for release early 2006, in addition to 4 songs from their 1st Album and 10 from Barí.

2. Documentary ODB – Girando a compás (“Around the beat” or ”Touring the beat”) 61 minutes. Introducing Ojos De Brujo on tour.

A fresh look, free from artifice, taken from deep inside the band’s heart. The filming was done by André Cruz , director of the band’s videos and the man responsible for the screenshots used during the live shows. For three long years André has filmed the band in airports, at sound-checks, in recording studios, rehearsals, and during the illegal occupation of an industrial area on the outskirts of Barcelona. The documentary also features exceptional footage of the giant graffiti covering the walls of Barcelona.

3. EXTRAS: 4 video clips, making of, and interview with, a graffiti collective in Barcelona.

Live and documentary footage directed by André Cruz with the collaboration of Aurora Sulli.

Graphics, animation and design by Miguel Angel Ramos and the Obsolet team.