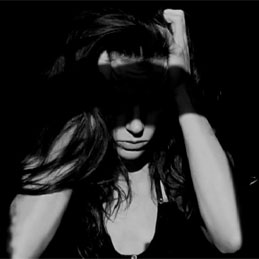 For the first of three In The Dark sessions Paula Rae Gibson will be performing with DJ Dan Lywood with whom she is recording a dance album. Tonight they will do a set in the dark, leaving the audience the chance to dance like they’ve never danced… listen like they’ve never listened. Her dark lyrics have more light and hope in them than ever, and when set to Dan’s electronic dance beats, create the perfect way to sustain you through the week by chasing away all the demons.

The basic facts are that Paula Rae Gibson is a singer, a songwriter, a photographer and a filmmaker but with Paula the devil is in the detail. Her husband, film director Brian Gibson died in 2004, after which Paula threw herself into her art – partly in order to distract herself from her pain and create artefacts that offered some sense of pleasure and
release.

Her debut CD, written as a direct response to her husband’s death, No More Tiptoes, was released in 2007. The track We Blow It Everytime was selected as one of Time Out magazine’s top ten of the year. PRG followed up with 2008’s Maybe Too Nude which she recorded with Goldfrapp’s Will Gregory. Paula’s third CD Rather Make Believe Than Make Do is due early in 2010.

Paula scripted, composed the music for, and acted in, What Are You Doing Forever? which was screened as part of the Portobello Film Festival, and her video The Poet Without Tragedy won the prize for the Best Music Video at the 2009 Independent Film Festival.