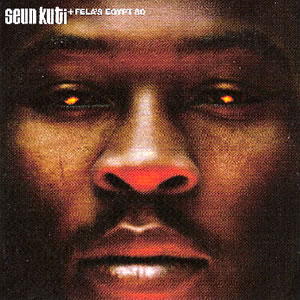 The sacred fire of Afrobeat.
The heritage of Fela

The opener, “Think Africa”, kicks off with a guitar riff suitable for only the most nimble of fingers, declaring that Seun Kuti is coming correct with pure, uncut Afrobeat: the perfect melding of guitars, horns, rhythm section, voices, Highlife, Funk, Yoruba and upfront politics. The promise of “Think Africa” is maintained throughout “Many Things”, the first full album from Fela’s baby boy, featuring seven dynamic performances from one of the world’s great bands. Egypt 80 was Fela’s last group and Seun has been a member of it for most of his life. Now Seun moves to centre stage – and on listening to “Many Things” you can hear that he is more than ready to inherit one of the world’s most vibrant and influential outfits. And then there’s the production….

Martin Meissonnier’s CV includes productions for Khaled and King Sunny Ade – as well as Fela Kuti. The man obviously knows his African music legends and has no doubt that Seun is the force to take Afrobeat forward. Meissonnier’s production brings fierce clarity and power to the 12 piece band – bringing a huge sound without ever being bombastic.

Seun cites Chuck D, Dr Dre and Eminem among his musical heroes and his band certainly isn’t a clone of his father’s. Above all they are just the best funk group today, which is no surprise really as for the last 25 years they’ve played and rehearsed daily in Lagos at the Shrine Club.

Fela’s music was also closely tied to his outspoken political views, and Seun is also keen to perpetuate, in an updated form, his father’s message. ‘He wasn’t afraid,’ Seun has said. ‘I want to make Afrobeat for my generation. Instead of ‘get up and fight,’ it’s going to be ‘get up and think’.’

Time to get on the good foot.
Seun Kuti is the youngest son of the late Fela Anikulapo Kuti, Nigeria’s most world-renowned popular musician and probably its most acerbic critic until his death in 1997. Seun Kuti has been performing on stage since he was nine years old, after starting his career as opening act for his father’s band Egypt 80 at the Shrine in Lagos.  He has kept the band – containing many veterans in their 50s and 60s – performing in the same style as in Fela’s day, with as many as twenty singers and musicians in explosive live sessions, wearing original costumes and fronted by Seun Kuti’s vocals and saxophone.

The name of Seun Kuti’s inherited orchestra might be seen as surprising. Fela’s renamed his original group, Africa 70, in 1983, after he’d read the resounding works of Senegalese historian/anthropologist, Cheick Anta Diop, on black Africans originating from Pharaonic civilisation.

The orchestra is legendary in the true sense of the word – and what an orchestra it is! As soon as Egypt 80 blasted out their first notes, they instantly set things straight. It’s been easy to forget what big dance orchestras are all about, what the likes of Fletcher Henderson, James Brown and Sun Ra, Count Basie and Lionel Hampton really mean. And not forgetting George Clinton, another – very audible! – influence on Seun Kuti.

Veteran musician Lekan Animasahun, nicknamed Baba Ani, has now relinquished his sax lead to the excellent Adedimeji Fagbemi, (stage name Showboy, who also plays the role of MC) as the instrument became too heavy for the seventy-year old. Baba has now taken on the keyboards but remains musical director of the orchestra.

But Seun’s orchestra isn’t a clone of his fathers, even if we do see as much crazy, frenetic movement on stage and even if two thirds of the orchestra’s members were there in Fela’s time. Above all they are just the best funk group today, which is no surprise really. For the last 25 years they’ve played and rehearsed daily in Lagos at the Shrine Club… the name of the club says it all.  Egypt 80 embody the major aspect that’s been lost in popular music: endurance. They’ve been together for over 20 years and it shows. Music is after all about human relations. Duke Ellington once said that to play well with another musician, you have to know how he plays poker!

Afrobeat has been one of the most influential sounds to emerge from the continent, combining jazz, James Brown’s Funk and Highlife in an explosive brew which went on to influence many US musicians.  Fela’s music was also closely tied to his outspoken political views, and Seun is also keen to perpetuate, in an updated form, his father’s message. ‘He wasn’t afraid,’ Seun has said. ‘I want to make Afrobeat for my generation. Instead of ‘get up and fight,’ it’s going to be ‘get up and think’.’