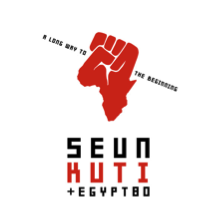 June 7
Field Day
Victoria Park
London, E9 7BT
1, 2, 3, 4… with a clenched fist and a blast of his alto-sax, Seun Kuti launches into ‘IMF’, the opening track on A Long Way To The Beginning – his tightest, most electrifying album yet. This time around no one escapes the Afrobeat warrior’s ire: not corrupt Nigerian leaders or sly western powers. Not bankers, corporate greedheads or any lying, cheating international mother***ker anywhere.

‘My people are coming for what’s ours,’ sings Kuti, 31, in his powerful, stentorian voice. ‘Going all out ‘cause it’s now or never, ‘breakin’ the chain, we gon’ sever…’

It’s been a struggle to get to now. There were those who criticized his decision to front his father’s band; who said it was arrogant, even hubristic, to try and fill his father’s shoes. This was never Seun’s aim: “Fela will always be Number One,” says the Lagos-based scion, who inherited the extraordinary Egypt 80 orchestra in 1997 when his father died.

And so Fela’s youngest child has full-steamed ahead with his own inimitable brand of Afrobeat: a sound as compelling as it was when Fela Anikulapo Kuti first fused jazz, funk and soul with highlife and other African rhythms – but with topical lyrics and contemporary influences giving it a modern twist. So far there have been two critically acclaimed albums: 2008’s Many Things and 2011’s From Africa With Fury: Rise.

With A Long Way to the Beginning, we’ve arrived where the journey starts.

“This is the beginning of the reign of Afrobeat music,” says Kuti. “Afrobeat is not just about being Fela’s son anymore. There are hundreds of bands playing Afrobeat around the world, from Australia to Israel to the US. What began with my father has become a global movement.”

And A Long Way To The Beginning is at its vanguard. Co-produced by the Grammy-winning American jazz pianist Robert Glasper, the album features a clutch of young artists from the African diaspora – the singer Nneka, rappers M-1 of dead prez and Blitz the Ambassador, and on the ‘IMF’ remix, the award-laden US trumpeter Christian Scott. It’s a recording that lassos all the passion, adrenalin and searing truth of a Seun Kuti & Egypt 80 live show.

Here, then, are the kicking basslines, strong horn melodies and call-and-response hooks that have made Egypt 80 – led by saxophonist-turned-keyboard player Lekan Animashaun, 73 – the stuff of legend.

But here, too, is space. Longer intros and more instrumental parts serve to underline the lyrics, lend them more impact: ‘See young people marching down the street and they chanting,’ runs ‘Higher Consciousness’, a song Kuti wrote in support of popular uprisings, showcasing the power of Afrobeat to open minds and unglue eyes. Like ‘African Airways’ – whose lyrics highlight Kuti’s talent for biting satire – it’s a track with a shimmering, drawn-out intro.

Kuti composed with his future collaborators in mind, heeding the advice given to him by Brian Eno, his co-producer on Rise: “Brian is a musical genius,” he says with a grin. “He told me that if I really wanted to work effectively with other people then I had to give them the breathing room to express themselves. This meant that once we got into the studio, Robert [Glasper] was able to bring his own ideas to the music, and add more colour to the sound.”

All his guests share like minds and a common message. “I read an interview with M-1 where he said he’d like to work with me, so I hit him up on Twitter,” says Kuti of the committed pan-Africanist whose scattergun commentary peppers ‘IMF’. “We have the same consciousness: he tries to speak for the majority and encourage them to develop themselves emotionally and mentally.”

Mutual friends in New York introduced Kuti to Blitz the Ambassador (“I liked his take on African hip hop and the message it should be portraying”); the Ghanaian-American spitter lends his vocals to ‘African Smoke’, a ferocious rallying cry on which Glasper also guests. Then there’s his friend, the German-Nigerian songbird Nneka, who delivers the lyrics of ‘Black Woman’ – a melodious paean to the women of the Motherland – in a voice both elevating and life-affirming.

“There’s a lot of propaganda about how all African men are sexist and I wanted to address that,” says Kuti, who with Yetunde Ademiluyi, a singer and backing dancer in Egypt 80, recently became the first-time parent of a baby girl. “Nneka also represents what I’d love to see in young black female artists, in that she portrays herself as nature intended her to be.”

‘Black Woman’ also sees Kuti name-checking strong female African personalities: Maya Angelou. Angela Davis. Nina Simone. His grandmother, Funmilayo Ransome-Kuti, a prominent civil rights campaigner (and the first woman in Nigeria to drive a car) – who died in 1978 after the Nigerian military threw her from a window during a raid on the Kalakuta Republic, her son Fela’s compound.

“I’m a member of a family that’s always been part of the struggle,” says Kuti, who references his unconventional upbringing in the anthemic ‘Kalakuta Boy’. “But more and more there are educated African youth who understand the system, who know that they deserve to be respected as citizens, and to life peaceful lives as human beings. This frustration is coming to the boil.

“Bringing a child into this world has given me a kind of renewed energy to make sure I stand for change in Africa,” he continues. “I want her to grow up in an Africa that represents its people.”

Having long lost faith in the music industry – “Today it’s controlled by corporations who own the media, which then dictates what ‘good’ music is” – Kuti is fighting the fight elsewhere. His weapons are fearsome: social media. Socio-political movements such as Occupy Nigeria and Change Movement Nigeria (http://www.changemovementng.org ): “We are a group of young concerned Africans who believe that with personal effort and dedication we can make a difference, not by going crying to western countries for donations.”

Afrobeat is leading the charge: “This album is a soundtrack for the mindset of most young people in Africa today,” says Kuti of A Long Way to the Beginning. “As African youth we have to stand for what we want.”

So now look. Look at the Kalakuta Boy out the front of Egypt 80, the band that speaks for the common man in Africa and right around the world. See him strutting the stage stripped to the waist, his saxophone around his neck, the sweat of conviction on his brow. See those two words tattoo-ed across his back like wings: FELA LIVES.

“I have to believe that I am making Fela proud,” says Kuti, whose shoes are one size larger than his father’s anyway. “Over the years the band has come back to its peak, to the place they were in when Fela was fronting them.”

He pauses, smiles. “And now,” he says, “we go forward.”
Jane Cornwell