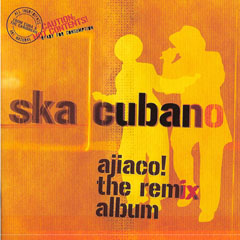 Ajiaco (A-Heea-Ko) is a Cuban stew made of indigenous root vegetables, as well as being a hot favourite in Colombia. Ajiaco is also the name of the new Ska Cubano remix collection with contributions from Da Lata, Spiritual South, DJ Dolores, The Sea (aka Latin Dub Collective/Corin Pennington), Ojos de Brujo’s DJ Panko and many more. Each adds different flavours to the unique Ska Cubano sound in their own style and fashion highlighting reggae, dub, afrobeat, drum and bass and much more

Ska Cubano fuse the sounds of pre-revolutionary Cuba with Jamaica’s choppy ska and the occasional ripe Colombian Cumbia to create a brew that kicks like a cocktail blending Wray & Nephew + Havana Club. They arrived fully formed in 2004 as the lost musical link between the Caribbean islands of Cuba and Jamaica. Jamaican immigration into Cuba in the 1920s & 1930s guaranteed Cuban cultural kinship with Jamaica, reflected in the huge popularity of Spanish versions of Jamaican calypsos in the 1950s. The Cuban Revolution in 1959 cut off Cuban/Jamaican cultural interaction, consequently ska never took root in Cuba in the 1960s although founder members of Jamaica’s finest ska outfit The Skatalites, Rolando Alphonso and Tommy McCook, as well as Ska Don Laurel Aitken, were all born there. The emergence of Ska Cubano is the creation of alternative cultural history.

A line up featuring Natty Bo in his Cab Calloway threads on vocals and super-charged stage presence; Megumi Mesaku aka Miss Megoo on Alto and Baritone sax and bringing great musical skill alongside effortless glamour; Jesus Cutino all flowing locks and tres licks; wise sage Eddie ‘Tan Tan’ Thornton who’s played his trumpet with everyone from The Beatles to Georgie Fame’s Blue Flames to Jimi Hendrix to Jazz Jamaica; MD Rey Crespo on rock steady double bass; look the part – and they deliver. They make crowds smile, skank and wind their collective waist. They’re bawdy and infectious, a visual and musical feast, there’s nothing like them. But backing up the obvious fun and frolics there is mucho musicality.

In 2004, debut CD “Ska Cubano” was released to great acclaim:

“The Skatalites in Santiago de Cuba – that is the spirit of this brilliant concoction.” Evening Standard

and the band hit the road with gigs from New York’s Central Park to Tokyo.

In 2005 the band released their follow up ¡Ay Caramba! which added cumbia picante to the party:

“Altogether a triumph: if Ska Cubano didn’t exist, it would be imperative to invent them….” Songlines ****

“… in a perfect, parallel UK, this album would generate a handful of top 10 singles.” Independent On Sunday

More rambunctious live shows followed, from Copenhagen’s Nobel Prize celebrations to Glastonbury and Roskilde Festivals. Their first London show of 2008 is at Koko and you can put your rum-splattered spats on it being as much fun as you can have with your clothes on and the perfect way to celebrate the return of La Linea, 2008 vintage. Ay Caramba indeed.