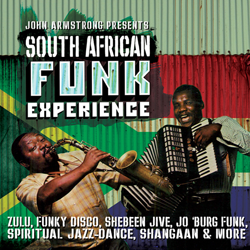 With the eyes of the world focussed on South Africa for the 2010 World Cup along comes a timely taste of South Africa’s respected musical culture, put together by a man who knows his Zulu Jive from his Mbube.

‘John Armstrong Presents South African Funk Experience’ is a blistering snapshot of the richness and diversity of black South African dance music in the late 70s and 80s. Club and BBC Radio 2 DJ John Armstrong was one of the first outside South Africa to play this music, at his Saturday night sessions at the legendary Bass Clef club, Hoxton, throughout the 80s and into the 90s – so all cuts have been extensively tried and tested over the years (by 80s regulars Mr and Mrs Hugh Masekela among many others).

John’s selection is culled partly from the Gallo catalogue and its many subsidiaries and associate labels, and also from the many small independent labels that sprang up in Europe and elsewhere in the wake of the waves of expatriate SA musicians and producers. Quite a few of the tracks have had to be carved afresh from original vinyl sources because of long-lost masters so many are appearing on CD for the first time!

These songs tell the forgotten story of the music that rocked the shebeens, brothels and bars of Soweto and the notorious migrant camps – Zulu, Shangaan, Mbqanga, deep funk, spiritual jazz workouts and more.

It may not be Funk as we know it. But funky it sure enough was, is, and will always remain so…

A handpicked township funk band specially put together for this night only with a brief to play 100% township funk and jive. The group, which includes the celebrated Capetonian tenor man Frank Williams and Incognito’s Richard Bailey, have collectively been mainstays of the bands of Dudu Pukwana, Jonas Gwangwa, Chaka Khan, Brotherhood Of Breath, Jeff Beck and others – so these guys know funny from funk!