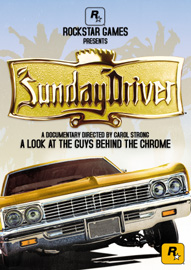 Before “Pimp My Ride”, there were the Lowriders.

Featuring the guys behind the chrome, SUNDAY DRIVER provides viewers with an intimate and entertaining portrait of the lowrider community in Los Angeles, California with the same compelling entertainment content found in Rockstar’s award-winning video games.

A local news story about a group of lowriders creating a disturbance on Crenshaw Boulevard caught the attention of first-time director Carol Strong who was intrigued enough by the story to decide to follow the Majestics, the oldest African-American lowrider club in California – an endeavour which lasted for nearly a decade. Although under constant scrutiny by the police, the Majestics manage to keep their passion going, while striving to outlive their gangster pasts. A car club dedicated to creating the definitive modified automobile, the Majestics come together to help each other realize their dreams in life.

Produced by Rockstar in the independent documentary style, SUNDAY DRIVER features one-on-one interviews with club members, exclusive lowriding footage amongst a fabulous soundtrack with lowrider classics such as “California Love,” with Dr. Dre and 2Pac; “Just My Imagination” and “Ball of Confusion,” by The Temptations; “Whatcha See Is Whatcha Get” by The Dramatics plus tracks from Jurassic 5, Bad Medicine, Booker T. & The MGs and more.

The DVD special features includes bonus interviews and “under the hood” extra footage as told by the masters themselves including president of the Majestics, Frederick “Gangster” Staves.