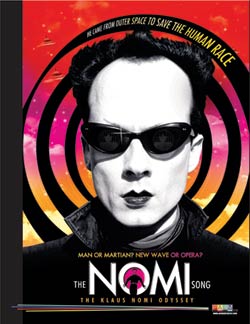 TO SAVE THE HUMAN RACE

Man Parrish and The Moog Cookbook

Andrew Horn’s award-winning* look at the life of German-born singer Klaus Nomi, The Nomi Song, comes home on DVD from Palm Pictures on August 29th, 2005. One of the most profoundly bizarre characters of the late 70s/early 80s New Wave underground scene, Klaus Nomi was a genuine counter-tenor who sang pop music like opera to enthusiastic club audiences. Through archival performance footage and interviews with his friends and fellow artists, Nomi’s influence and unique style are brought to life twenty two years after his death from AIDS. DVD special features include director commentary, “The East Village in Pictures” featurette, deleted scenes and additional interviews, several full performances and a recipe for the Klaus Nomi Key Lime tart….

Part documentary, part music film and part sci-fi, The Nomi Song is a story of love of music and love of performing at a time when it seemed as though everyone was struck by a sense of urgency to make something – anything. A time of no limits. Klaus Nomi was on the verge of international fame as a singer when he tragically became one of the first gay artists to die of AIDS. He was as much a genuine talent as he was the engine of his own destruction. He was an alien amongst the outcasts and an obviously tortured soul who, at the same time, radiated optimism when optimism was “officially” out of fashion. The Nomi Song is a story that grows out of a group of people who influenced him; people who felt used, cheated yet, overall, inspired. Featuring Ann Magnuson, Gabriele Lafari, David MacDermot, Page Wood, Tony Frere, Man Parrish, Kristian Hoffman, Ron Johnsen, Kenny Scharf, Anthony Scibelli, Alan Platt –with a special appearance by David Bowie.

The Nomi Song features the music of Wire, The Marbles, The Bongos, Pylon, The Mumps, Chi Pig, and, of course, David Bowie. This DVD also includes Klaus Nomi performances, many never before seen since originally performed by Klaus including a full performance of “The Cold Song” with full orchestra – Klaus’s ultimate performance.

· Full musical performances: “The Cold Song,” “After the Fall”

and The Moog Cookbook

· The East Village in Pictures featurette