80s World Music Classics — “When The World Was Young” 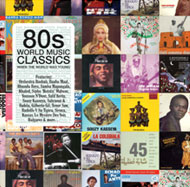 “When The World Was Young”

These were the radio, press & club best-sellers that defined world music in the 1980s and have been selected by 12 of the DJs, journalists & promoters who shaped the world music scene in the UK at the time such as Charlie Gillett, Ben Mandelson, Ian Anderson, Jumbo Vanrenen, Iain Scott & others.

On the one hand the 1980s gave us Sloane Rangers and loadsamoney City boys resplendent in extravagant red braces indulging in the relatively new wine bar culture. On the other hand they were hard times for many with the country under heavy Thatcherite manners: teenagers sleeping on the streets, the notorious ‘sus’ laws, nationwide uprisings, police/youth confrontation, the National Front, Rock Against Rascism and the epoch-defining miners’ strike. But hard times can be productive times: pirate radio stations sprung up everywhere as an antidote to syndrums, poodle rock bands and Eurovision contest winners. People were also travelling much further afield than Benidorm and in ever greater numbers with many experiencing Africa and Latin America, maybe on gap years or working for VSO, and returning with more exotic tastes.

Until Thatcher abolished it in 1986 the GLC tried to reflect multicultural London, in part, by bringing in bands from around the world who, once in the country, toured its length and breadth calling in on regional arts centres and Town Halls. There was huge excitement in discovering the sounds of the cuica, berimbau and the kora; how to move to the clave rhythm as well and finding new uses for your hips.

The term ‘World Music’ was agreed upon in 1987, Channel 4 were broadcasting “Big World Café” and I started the Mambo Inn, along with Sue Steward and Max Reinhardt, a superclub in all the best senses of the word following in the wake of sessions and venues like Sol Y Sombra, Gold Coast, A Night in Havana and the Bass Clef.

Imagine a time “When The World Was Young”. Not the easiest thing to do in the present era of vocodered so-called r&b, recidivist rock and generic pre-pubescent pap (and how could we forget Simon Cowell and all his doings?) – although with the likes of Manu Chao, Amadou and Mariam, Tinariwen and the African Express phenomenon being exposed to larger and larger audiences the pioneering work of the 80s is bearing tangible fruit. 80s World Music Classics: So rich, varied and still downright essential.

“This compilation began to take shape during a meeting in Charlie Gillett’s record–lined basement back in 2007, when, with typical enthusiasm, he began pulling out records from the period and offering a fascinating and impromptu guide to the birth of what we now know as ‘world music’. Several of the tracks here were recommended for inclusion by Charlie on that day, and When The World Was Young is respectfully dedicated to his memory.” Nigel Williamson