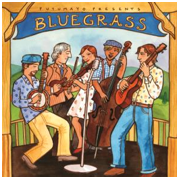 Putumayoannounces the May 22nd release of Bluegrass, an engaging collection featuring many of the genre’s most renowned artists along with exciting new discoveries. The album is Putumayo’s first venture into the world of bluegrass and includes Alison Krauss, Sam Bush, Peter Rowan, David Grisman and other starsalongside some of today’s up-and-coming young groups like Railroad Earth, Town Mountain and Uncle Earl.

Bluegrass offers insight into the variations within the genre, from the mesmerizing vocals and skillful instrumentation of Alison Krauss and Union Station (“Every Time You Say Goodbye”) to Railroad Earth’s contemporary newgrass sound on “Been Down This Road.” Then there’s the lively rendition of “Jackaroo,” by legends David Grisman and Jerry Garcia, alongside the soft, contemporary sounds of Andrea Zonn with Alison Brown.

Frank Solivan’s “Across the Great Divide” and Peter Rowan’s “Man of Constant Sorrow,” transport listeners with their earthy, newgrass style. James Alan Shelton brings his beautiful melody-oriented guitar playing to the traditional song “Shady Grove,” and Crooked Still adds a modern bluegrass sound to “New Railroad.” One of bluegrass music’s longest performing groups, The Seldom Scene, provides their distinctive vocals and picking to the Dylan classic “Boots of Spanish Leather” followed by the versatile all-girl string band Uncle Earle on “The Last Goodbye.” Young North Carolina natives Town Mountain contribute their original, traditional bluegrass stylings with “Diggin’ On The Mountainside,” while the inimitable Sam Bush, brings his beloved mandolin playing to “Diamond Joe.” The album closes with a rendition of the gospel favorite “I’ll Fly Away,” performed by a variety of talented artists.

To listen to tracks from the album, click http://putumayo.bandcamp.com/album/bluegrass. Bluegrass is available at selected music, book, gift, and specialty stores around the world, and for digital download on www.putumayo.com and selected online stores.

Bluegrass, sometimes called the “jazz of country music,”evolved from the string band style developed by Bill Monroe and his Blue Grass Boys in the late 1930s. The sound is characterized by masterful, often improvisational, instrumental performances combined with distinctive vocals and harmonies. A native of Kentucky, Monroe named his band after the Bluegrass State. He merged old-timey mountain music with blues and gospel tunes. Over the next 50-plus years, Monroe performed with countless musicians who served “apprenticeships” as Blue Grass Boys, then left to start their own groups. By the 1960s, the music was known as bluegrass.

Monroe’s first edition of the Blue Grass Boys included fiddle, mandolin, upright bass and acoustic guitar. When North Carolinian Earl Scruggs joined in 1946, contributing his lightning-speed five-string banjo playing, he created a musical innovation that has come to define the sound of bluegrass. “Bill settled down with a five-piece group with my style of banjo picking and has kept it ever since,” Scruggs once said. “The other groups started copying his group, and now the sound is all over the country and foreign countries too.” Over the years, other instruments such as Dobro, slide guitar and even electric bass have found their way into bluegrass.

In 1948, Scruggs and flat-picking guitarist Lester Flatt departed from the Blue Grass Boys, formed Flatt & Scruggs and spread the music to a younger audience. After scoring hit TV and movie themes such as The Beverly Hillbillies, on which they played a recurring role, and Bonnie and Clyde, Flatt & Scruggs split up, with each man continuing as a bandleader. On this collection, you’ll find Bill Monroe and Flatt & Scruggs acolytes from successive generations who fell in love with bluegrass and have also contributed to its sonic evolution.

Bluegrass grew its audience in the great outdoors. Beginning in the early 1960s, southeastern bluegrass festivals attracted increasing crowds. In the ’60s, Monroe and Flatt & Scruggs appeared at the Newport Folk Festival, which expanded their audience and attracted numerous younger musicians to the infectious style. A whole new generation of listeners discovered bluegrass thanks to the 2000 hit film O Brother, Where Art Thou? It featured a soundtrack with music by Alison Krauss and other bluegrass stars that sold more than 15 million copies. Today, bluegrass is beloved from Tennessee to Tokyo.