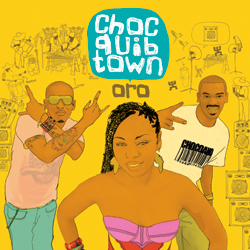 With a Latin Grammy nomination in the bag, major successes at South By South West (Austin, Texas, US) and Womex (Copenhagen), performances in India, Europe and the US and the brand-new international release Oro (‘Gold’), Afro-Colombian hip-hop sensation Choc Quib Town is ready to take the European summer festivals by storm.

‘Somos Pacifico, estamos unidos, nos une la región, la pinta, la raza y el don del sabor.’ The refrain of Choc Quib Town’s Somos Pacifico means something like: ‘We are the Pacific Coast, we are one, united by the region, its looks, ethnicity and tastes.’ The song has since attained the status of a kind of national anthem for an entire generation of Afro-Colombians.

Rap formation Choc Quib Town – the core of which comprises MCs Goyo, Tostao and Slow – was founded in 2000 in Chocó, a province in northwestern Colombia, on the Pacific coast next to Panama. They all lived in the capital Quibdó at the time. ‘That’s where the name of the band comes from,’ says front woman Goyo. ‘We wanted to honour our region and use both the English and Spanish languages.’ In the sweltering rain-forested region, more than 80% of the population is African by origin. Moreover, the region’s relative isolation means that their African music has been well preserved. It is these Afro-Colombian rhythms that Choc Quib Town mixes organically with hip-hop, funk, dance hall, electronics and Caribbean flavours to create their own unique urban style.

Tostao: ‘The youth are no longer interested in folklore. They listen to it, but treat it as ‘grandma’s music’. To the youth, it’s all about reggaeton. But we want to honour that folklore by redefining it. Our work is an ode to the music of the Pacific coast, seen from from our perspective, our frame of reference. And that is hip-hop.’ Their big hit ‘De Donde Vengo Yo’ is, for example, an irresistible mixture of the bambazú rhythm and Jamaican dancehall. ‘Oro’, a song in which slavery plays a central role, is clearly a currulao, with its slow, sensual rhythm and accompanied by African marimbas (wooden xylophones).

Their hit and first single of the European album ‘El Bombo’, with its infectious refrain, combines currulao, chirimía and ragga; spreading those ‘black’ rhythms beyond the borders of their region is an important mission for the band. Goyo: ‘Many people didn’t know the music of the Pacific coast. There is such a wealth of rhythms and they blend perfectly with other styles.’ Tostao adds: ‘Even outside Colombia, the music is often lost among the things people tend to associate our country: cocaine, coffee, salsa, cumbia. People don’t know much about this “Africa within Colombia”. We rap about a Colombia that you don’t see on TV.’

In their own country, these local heroes of Choc Quib Town – who have since relocated to Bogotá – have a huge following. They have collaborated with groups such as Aterciopelados, Sidestepper, Banda La Republica, salsaband La 33 and French hip-hop maestro Oxmo Puccino. They also shared the stage with Orishas, Sergent Garcia and Sean Paul. In 2008, the group received multiple nominations for Premios Shock – Colombia’s national music awards – and a couple years later they were nominated as the best newcomers at the Latin Grammys.

In March 2009, the band made their debut at South By South West (SXSW) where they were ‘the talk of the town’. And last October Choc Quib Town played a showcase for a crowd of delirious dancers at the Womex music festival in Copenhagen. Last October Choc Quib Town played exhilarating and packed shows in all the hip clubs in European capitals like Dot Club in Berlin and Electric Ballroom in Camden, London.

On 14 June 2010, World Connection presents Choc Quib Towns’ international release Oro, a combination of the best from their two Colombian albums Somos Pacifico and Oro. The band will be showcasing the album at festivals in Europe this spring and summer. In an energetic, vigorous live set with a lot of room for improvisation, the three MCs are joined by drummer Andrés Zea, bassist Alex Sánchez, guitarist Juan González and Larry Viveros on traditional Afro-Colombian percussion instruments like the tambora (bastrom), congas, djembé and marimba.

“It’s no secret that Colombia’s Choc Quib Town are one of our favorite recent discoveries here at Nat Geo Music – we were blown away the first time we saw the lyrical triumverate of Tostao, Goyo and Slow combine laptop hip-hop with the rhythms and dialect of the black communities of Colombia’s Pacific Coast.”

Their naturally uplifting, gypsy ska and reggae beats come together with lyrics which talk with sincerity and humour about marriage, post-coital cigarettes and head injuries. A particularly outstanding collaboration with Karina Zeviani of Thievery Corporation fame on ‘Marions-nous au soleil’ heralds an album with high ambitions and excellent pedigree to go with it. A multi-lingual and multi-faceted album delivered by a multi-talented band.