The Best of Bheki Mseleku 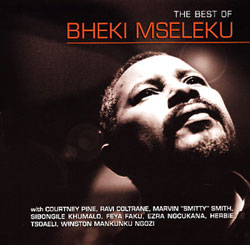 No matter whether his themes are Township-based, straight ahead Bop or Ellington-inspired, the melancholic, yearning sigh that is the signature of South Africa’s distinctive style comes through in all of Bheki Mseleku’s playing. Maybe it’s a reflection of his country’s painful history – for America’s Deep South read South African blues – but it’s a quality you hear in all the South African greats from Abdullah Ibrahim to Hugh Masekela to the Mahotella Queens. Even the overtly joyous tunes have a been-down-so-long-it-feels-like-up-to-me edge and, make no mistake, Bheki’s body of work puts him up there with his more celebrated countryfolk.

Born in Durban, Bheki Mseleku is an internationally acclaimed multi-talented instrumentalist on piano, saxophone and guitar as well as being a gifted composer, vocalist and arranger.

“The Best Of” brings together some of Mseleku’s finest moments on one resounding jazz album. After travelling the world extensively; socialising, playing, and recording with some of the world’s greatest jazz musicians for decades; six of his previously-released albums now find representation on one disc.

Bheki Mseleku’s music is difficult to define. It is not strictly “Jazz”, “Avant Garde” or any other form of specific music for that matter. Journalist, John Matshikiza said: Bheki has always shied away from labels like “black”, “exile”, “South African”, “Jazz” or even “Pianist”. His diverse talents and broad outlook on life in general ensure that his music carries a wholeness, uniqueness and spirituality that is indefinable, but also impossible to ignore.

Proper recognition of this fine multi-instrumentalist’s (piano, composer, vocals, saxophone, guitar) talents seemed long in coming, but since 1991 this modest and dignified performer has been very much in the limelight, touring internationally and releasing several albums with major record labels, as well as featuring on some massive releases from other artists.

Bheki Mseleku arrived on the Johannesburg music scene in 1975 as an electric organ player for an R&B outfit, and has over time adapted and grown into one of the world’s finest musicians. He is one of a number of supremely talented musicians who left South Africa and its oppressive apartheid system to take up residence in London, leaving South Africa’s shores in the late 70’s.

After extensive touring around Europe and the U.K., his debut performance at Ronnie Scott’s in London (’87) saw him teaming up with some of the more prominent figures from London’s Jazz revival scene. This eventually led to the release of his star-studded debut album “Celebration”(1991).

Featuring the likes of Courtney Pine, Steve Williamson, Eddie Parker, Jean Toussaint, Michael Bowie and Marvin “Smitty” Smith, the album was well received and supported with a heavy touring schedule, and a deserved nomination for British Mercury Music Prize for Album Of The Year.

Signing to the Verve/PolyGram label at the end of 1993, Mseleku’s “Timelessness” found him in the company of some top American heavyweights, including Joe Henderson, Pharoah Sanders, Abbey Lincoln and Elvin Jones, and was accompanied by more media furor.

His fourth release “Star Seedings”(1995) and his last release of the decade “Beauty Of Sunrise”(1997) with Polygram, saw Mseleku entering a new era of success. Highly acclaimed, these albums and their respective tours saw Mseleku appealing to a wider audience than ever before.

In 2003 Bheki gave us his latest, and greatest, offering, “Home At Last”, under the Sheer Sound label. It is here that Bheki pay’s tribute to the spiritual construct that is “home.” To Bheki, a self- confessed “Citizen of the World”, home is not a place as such, but a spiritual construct made up of special people and relationships, those that came along on the long hard road, those that were left behind to be re-visited later.

According to well-known journalist, John Matshikiza, this is an album that “sounds of home in a Bheki key.” (This because Bheki has established a new key signature in the internationally recognized systems of musical notation.)

‘ However much he humbly pays tribute to the “home” that made him, and to whose image in sound he, in turn, pays homage to on these tracks, it is his eternally original spin on the music, the music of the land, the mountains, the people, the cities, the politics, the sensual violence of the blistered townships, as much as the infinitely distant music of the spheres, which he has brought us closer to in his earlier albums, that drives you through to the final beat. This is “home” on Bheki’s terms at last.’

Featuring the talents of other South African legends Feya Faku on trumpet, as well as Winston Mankunku Ngozi on sax, to mention a few, Bheki brings it all “Home At Last”. The album is a spiritual journey that, although eluding categorisation, cannot be ignored or denied…

Vaughan Hawthorne-Nelson – See You There (1999) Piano

Joe Claussell – Music Is… A Reason to Celebrate