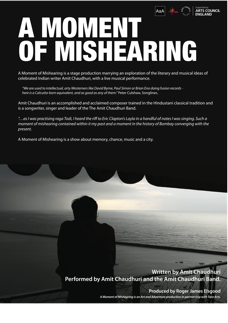 A Moment of Mishearing by Amit Chaudhuri – Touring February/March 2012

A Moment of Mishearing
by Amit Chaudhuri

An all-new, 90 minute stage show marrying the musical and literary ideas of the acclaimed Indian writer and musician Amit Chaudhuri.
Touring throughout February/March 2012

‘We’re used to intellectual, arty Westerners like David Byrne, Paul Simon or Brian Eno doing fusion; here’s a Calcutta-born equivalent, and as good as any of them.’ Songlines

Amit Chaudhuri has written and published five novels, three works of non-fiction, a volume of poetry and he is the editor of the Picador Book of Modern Indian Literature. His literary work has won major awards in Britain, the USA and India. He has released three albums of Hindustani classical music in India and two acclaimed albums on the Babel Label in the UK with The Amit Chaudhuri Band – ‘This is Not Fusion’ and ‘Found Music’ which he has toured in the UK, India, Germany, France, China, Denmark, Dubai and the USA

"I could hear certain Indian ragas in what Hendrix was playing – like Dhani, Jog, Malkauns – not because I’d gone looking for them, but in a way that one becomes aware, one day, of another dimension to an outline: like, for instance, the duck-rabbit, Wittgenstein’s famous mutant."

He explores his own musical education and the common root in both eastern and western traditions, weaving in references to Tagore, Magritte and Frankie Goes to Hollywood – "an excellent song; but, to my ears, noise, and noise I still wouldn’t have any idea what to do with" – and tells how chance mishearings of popular western tunes led him into the world of MySpace and YouTube and a second career as a successful recording and performing artist.

A Moment of Mishearing UK Tour