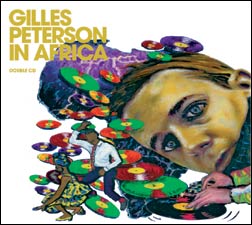 Gilles Peterson“If like they say, there are few certainties in life, then Gilles Peterson putting together great compilations surely has to be one of them.” Found Sounds DJ Magazine

“Stunning double album, with Gilles doing what he does best – handpicking the cream of the crop, and letting the quality of the music speak for itself.” Ben Mynott Blues + Soul

“Gilles delivers another impeccable fusion of global beats that get the mind’s senses flowing.” Reetu Rupal Time Out

After the huge success of Gilles Peterson in Brazil he travels back to the source with Gilles Peterson in Africa. Gilles plays such a wide a range of music, and has done for the longest time, that he could put together compilations in any genre from post-rock to folk funk and they would all be credible.

I remember checking him in the 80s at the Belvedere near Richmond Park on a Sunday; Monday nights at the Wag in Wardour St.; the legendary Talkin’ Loud sessions at Dingwall’s and the Fridge in Brixton; and closer at hand when he was a regular guest (when his globe-trotting allowed) at the peerless, mythical Mambo Inn; and Afro Funk and Afrocentric influences, especially Fela Kuti and Manu Dibango, were always in the mix. And both Fela and Manu are represented here along with some of their disciples.

Gilles came to African music via Paul Murphy’s DJ sets at the Electric Ballroom in the 80s and through his love for Jazz and Funk and Fusion – not via koras, mbiras, djembes and ‘world music’. So the chances are that this may not be for the purist, but Gilles is not a purist, he’s a music lover, groove lover and a song lover and if that’s where you’re coming from GPiA will tickle parts that other compilations don’t know exist.

Gilles Peterson in Africa touches down in Nigeria, Ethiopia, Ghana, Cameroon, South Africa, and the Cape Verde islands with considerable contributions from giants of the contemporary club scene and remixing royalty such as Masters at Work, Carl Craig, IG Culture,Thievery Corporation and Blaze alongside purveyors of 21st Century Afrofunk such as Antibalas, Dennis Ferrer and Wunmi.

Artists featured such as Miriam Makeba, Cesaria Evora and Abdullah Ibrahim will already be known to many while the likes of Letta Mbulu bubble under, and a few are either totally new or totally obscure, as is the way with Mr. Peterson

The artwork for Gilles Peterson in Africa was designed by GHARIOKWU LEMI who provided the distinctive sleeves for 25 Fela albums over a 19 year period.

Gilles knows our roots began in Africa and he’s paying his respects in his own style and fashion.

Download a PDF of the London Metro review here.