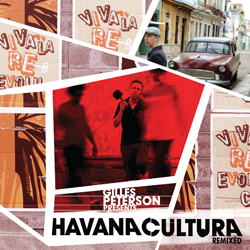 It was two years ago that Gilles visited Cuba for the first time on a reconnaissance mission to check out the new generation of Havana-based artists. Suitably impressed, he was back within the year for a 5-day session at the legendary Egrem Studios with Roberto Fonseca and his superb band. Revelling in his role as executive producer, it was a hot, sweaty, intense session but a fruitful one nonetheless:

“I had a few covers as starters: one from Fela to capture that true Afro-Cuban fusion; a Blue Note joint as a 70th anniversary gift; and a couple of Cuban faves from my Ballroom days – ‘Chekere Son’ and some Juan Pablo Torres. The rest was pretty much controlled jamming, picking up the Rumba boys from the bar below, or convincing Mayra Valdes to hit it freestyle.”

With Gilles living as much in the electronic/dance scene as in the jazz world, the decision to commission remixes of these session tracks was an easy one. Collating the numerous parts was by no means as straightforward, nor indeed was settling on the preferred remixers to coax the spirit of the Egrem session into the club. In the end, they settled on a squad of big-hitting producers who were trusted to do justice to the original jams: the likes of Louie Vega, MJ Cole, 4hero, Carl Cox, Rainer Trüby, Gotan Project’s Philippe Cohen Solal, Seiji, Michel Cleis and Mocky. All veterans of the Worldwide underground and all equipped with the skills and experience to flip Havana Cultura onto a another level. And of course, in order to maximise the Cuban flavour, DJ Wichy and Doble Filo were cut loose on their favourites from the album, with awesome results.

CD02 in the Havana Cultura Remixed package boasts a bonus DJ mix courtesy of Gilles himself that neatly weaves together the disparate threads that make up a typical Peterson DJ set. From the stirring percussion and meandering groove of Louie Vega’s marathon Latin workout to the hi-octane Benga-esque skank delivered by Carl Cox and the lazy ebb and flow of Michel Cleis’ magnificent shuffling houser, this is Gilles in his element.

In support of this incredible project to highlight the best of modern Cuban urban music, Gilles heads off on a European tour in June/July 2010, teaming up with the award-winning Cuban jazz pianist Roberto Fonseca, his band and vocalists Danay, Ogguere and Obsesión. Twelve months in the making, ‘Havana Cultura’ represents the biggest collection of contemporary Cuban musicians in a single musical initiative since the highly acclaimed Buena Vista Social Club project in 1997. What’s more we’ll be celebrating the release of the remix album with a European Club Tour featuring DJ Wichy/Doble Filo live and direct from Havana, Cuba, Brownswood DJs (Simbad/Lefto/Alex Patchwork) and special guests from the Havana Cultura remix roster.