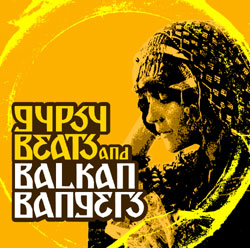 The scene is blowing up from Frankfurt to New York, Tel Aviv to London with new acts, clubs and even films and books being produced. Gypsy Beats & Balkan Bangers (brought to you courtesy of Basement Jaxx’ own Atlantic Jaxx label) has cherry-picked the freshest fruit and contains a serious selection of blistering music and good times blended with both modern and traditional styles – all infused with gypsy spirit.

Gypsy Beats and Balkan Bangers gets straight down to business with Bucovina, the anthem of the Balkan dance scene, from Germany’s DJ Shantel, who’s done more than anyone to bring these sounds to our grateful ears and heaving dancefloors – with his last album going Top Forty in Germany. Whilst visiting his grandparents in Bucovina, now part of the Ukraine, Shantel was re-acquainted with his Gypsy heritage and decided to take the music back to Frankfurt – and the Bucovina Club was born. He’s taken the night all over Europe and the result is always the same: scenes of drunkeness, anarchy and bedlam. Shantel also delivers a killer dub mix of Bucovina and a remix of Mahala Raï Banda’s Mahalageasca.

Fanfare Ciocarlia cover the James Bond Theme; Senor Coconut provides a Cumbia remix of The Koçani Orchestar, sampling the classic La Colegiala from Colombia’s Rodolpho Y Su Tipica; Gogol Bordello’s love of The Clash extends to them using ex-Clash tour DJ, Scratchy, on their own riotous tours. Their unhinged Balkan punk stomper Start Wearing Purple was Radio 1 presenter Jo Whiley’s record of the week, they sold out a recent show at London’s Astoria and are being championed by the NME; N.O.H.A.’s Balkan Hot Step was used for a Nike ad and played out by Radio 1 DJ Gilles Peterson; and Russ Jones and Roc Hunter drop their Brass and Bass Mix of Mahala Raï Banda’s Spoitoresa to bring the exclusive remix count up to 3 and taking Gypsy Beats and Balkan Bangers to a total of 15 cuts of joyous, raucous music from out there designed to put some Gypsy in your soul.

The unrivalled mix of energy, passion and immensely talented musicians has made Gypsy music one of the most exciting genres, on the planet. So at long last but with no surprise this music is finally receiving the props due and becoming a force to be reckoned with within music scenes around the planet. Alongside the traditional styles there is also a new movement breaking through. Eastern European kids, embracing the old and fusing with the new, creating a their own twist on the gypsy rhythms to make what has to be some of the most happening music to be heard in any club, on any radio show or on any iPod play-list. It’s blowing up from Frankfurt to New York, Tel Aviv to London with news acts, clubs and even films and books.

The band Gogol Bordello and its crazy front-man Eugene Hutz are real testimony to where this music is at. Eugene (now a New York resident but originally from the Ukraine) and the band have come up with their own unique style of ‘Gyspy Punk’ and are currently being championed by the UK’s BBC Radio 1 with daytime play-listing. They have been heralded as the successors to the Clash, and Eugene has featured in his first film. His weekly club night in Manhattan is legendary and the band is scheduled to play every major festival through the summer of 2006.

If Gogol Bordello has taken the NYC underground by storm then DJ Shantel is doing the same in Europe with his last album going Top 40 in Germany. Whilst visiting his grandparents in Bucovina, now part of the Ukraine, he was captivated by his Gypsy heritage and decided to take the music back to Frankfurt. By chance, the Schauspielfrankfurt Theatre was looking for a new series of events and the Bucovina Club was born. He has taken the night all over Europe and the result is always the same – scenes of drunkeness, anarchy and bedlam. At times it could be straight out of an Emir Kusturica film “Black Cat, White Cat”. On the back of the club night Shantel launched the album series and his slick well-crafted productions have been so well received that he recently won a prestigous BBC Award for World Music.

Among acts included here and coming up with a new and very club friendly twist are Balkan Beat Box and their track Bulgarian Chicks (apparently they have a very big following in Israel) and N.O.H.A. whose Balkan Hot Step was used for a Nike ad and played out by Radio 1 DJ Gilles Peterson.

Taking on the heritage of the established acts and more traditional live sounds but with modern sensibilities are Mahala Raï Banda. Formed out of the younger generation of the Legendary band Taraf de Haidouks (Johnny Depp being one of their biggest fans) and an ex military Romanian Brass band, their style as heard here on Spoitoresa truly expresses the heart and fire of the traditional and with modern productions courtesy of Shantel it crosses all boundaries, kicking butt with traditionalists and club kids alike.

Alongside the young turks with their twisted interpretations the older guns still know how to rock it. Included here are some killer tracks from Fanfare Ciocarlia and Koçani Orkestar. See the guys live it and will be as riotous as any gig by Gogol or Shantel. The finest of musicians, as tight as a duck’s backside, rocking and funky, you only have to listen isten to Haro Andalusia by the Koçani’s, to realize they could sit alongside the hottest Brazilian samba band or the most swinging jazz outfit and give them a good run for their money on any dancefloor or festival setting.

Gypsy Beats & Balkan Bangers features some of the best of this ‘nu’ music scene. The track listing a serious balance of cooking music and good times blended with with both modern and traditional styles and the spirit of the gypsy . From Fanfare Ciocarlia’ cover of the James Bond Theme to Senor Coconut’s crazy Cumbia remix of The Koçani Orchetsra to Gogol Bordello’s infectious Start Wearing Purple. With influences from India to Caribbean ska, waltzes and marching bands to the Clash and latest upfront dance music this will guarantee to surprise you, move your feet and put a smile on your face. So kickback the sofa, open the vodka and let the party begin.

‘Around the World in 80 Ways’ was one of Future World Funk’s aptly named club nights and for Russ Jones – a firm lover of good sounds and great eyewear – it is more like a way of life. Russ is behind some of London’s most successful clubs – and he’s been doing it for years with consummate ease. With total dedication to the music, Russ has founded several seminal clubs nights including London Calling and No Room for Squares. Guest deejays included, Gilles Peterson, James Lavelle, Paul Trouble Anderson, Fabio and Bukem. Later on Russ moved ‘London Calling’ to the infamous Blue Note where it became one of the key nights in turning this unique venue into a legend. Russ subsequently became the Artistic Director of the Blue Note and other venues across London. Around the same time Russ also helped to set up the celebrated Brazilian record label ‘Far Out Recordings’ with DJ/producer Joe Davis and worked with acts like Marcos Valle, Joyce, Four Hero and Roni Size.

Fast-forward to the middle of the first decade of the 21st Century and Russ is now promoting and programming the club night Future World Funk along with his partner in crime DJ Cliffy. The Future World Funk project has led to eight highly successful and critically acclaimed compilation CDs which in turn had led to gigs all over the world from Beijing to El Salvador, Moscow to New York and Australia to Europe. Alongside dj duties Future World Funk and Russ have also hosted and programmed festival stages at Glastonbury, Montreux, Womad and back in London host a monthly residency at the Notting Hill Arts Club and regularly appears in top venues like The Jazz Café and Cargo.

Like most successful DJs a natural progression is into the recording the studio and Russ is now taking up his residency behind the mixing desk. Teaming up with engineer and producer Roc Hunter there have already been remixes for Amadou and Mariam, Bollywood Brass Band and nu-gypsy act Mahala Raï Banda (to be included on Russ’ current forthcoming compilation ‘Gypsy Beats and Balkan Bangers’).

Finally in addition to all of these activities Russ produces his own ‘World Carnival’ channel for digital broadcasters Music Choice which is broadcast on the Astra satellite and cable TV across Europe and is working for the charity World Vision as an advocate for their cause and consultant on youth marketing.