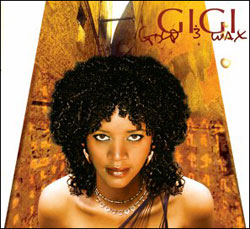 “One of the finest soul voices I’ve heard in a long time…. a fresh talent and truly international artist.” Straight No Chaser

“The combination of dreamy moods and alert instrumentation makes for a minor gem.”

After five years Ethiopian singer Ejigayehu “Gigi” Shibabaw returns with the much anticipated, Gold & Wax, an organic blend of African songs mixed with elements of Jamaica, India and America. After NY Times head music critic, Jon Pareles, cited her debut Gigi as the “best obscure album of 2001,” she dazzled international audiences as both solo performer and part of Tabla Beat Science and Abyssinia Infinite.

From the opening strains of “Semena-Wrock,” a jazz-inspired, kit drum-led up-tempo number, Gigi is on form and picks up right where Gigi left off. Surrounded by punchy saxophones, prominent drums and, of course, Laswell’s signature low-end, that golden voice remains the driving force of the next 66 minutes. By the second track, “Anten,” a newer side of Gigi emerges. Backed by a tasteful landscape of drum ‘n’ bass and resonant guitar echoes, this track proves much more aligned with her work with Tabla Beat Science: Laswell’s melding of Eastern sensibilities with Western grooves. The remainder of Gold & Wax continues in this form, from Khan’s inimitable sarangi and vocal work on “Hulu-Dane” to her exquisite balladry. The light textures of “Jerusalem,” organ-led dynamics of “Salam” (thanks to ex-P-Funker Bernie Worrell) and “Utopia”, the only English language song here, offer space for reflection.

With the release of the long-awaited Gold & Wax, Gigi is ensuring her place as an ambassador of ancient sound with modern sensibilities.

Gigi returns with long-awaited second album Gold & Wax famed singer again reinvents Ethiopian ancestry in song Since recording what NY Times head music critic Jon Pareles cited as the “best obscure album of 2001,” the long-awaited follow-up to Gigi’s stellar debut has finally landed. On her second effort, Gold & Wax, Ejigayehu “Gigi” Shibabaw has again proven her ability to seamlessly work the songs of her Ethiopian ancestry into a contemporary sound befitting the worlds of jazz, electronica and even dub-inspired African rhythms. With the effortless depth and scope of these 11 songs, Gold & Wax promises to be anything but obscure. The five years since her last recording – save Illuminated Audio, a spectacular dub rendering of Gigi by producer/bassist Bill Laswell – have afforded Gigi time to contemplate modalities of expression, keeping intact subtle nuances of her Amharic tongue while exploring an endless range of song forms. For Gigi, whose music is derived from the holiday of Genna (Ethiopian Christmas), traditional zefen (songs) and chifera (group dancing), finding a home in American stereos could seem daunting. And yet, given the gentle, at times playful, direction of Laswell’s sonic prodding, Gold & Wax maintains an illustrious gleam. Nothing is forced or out of place; every instrument falls perfectly into place, centered around the singer’s near-angelic range.

From the opening strains of “Semena-Wrock,” a jazz-inspired, kit drum-led uptempo number, Gigi returns to old form – the song picks up right where Gigi left off. Surrounded by punchy saxophones, prominent drum hits and, of course, Laswell’s signature low-end, that golden voice remains the driving force of the next 66 minutes. By the second track, “Anten,” a newer side of Gigi emerges. Backed by a tasteful landscape of drum ‘n bass and resonant guitar echoes, this track proves much more aligned with her work with Tabla Beat Science, Laswell’s South Asian supergroup, which features classical masters Zakir Hussain and Sultan Khan. The Tabla Beat family is featured throughout Gold & Wax. Khan provides his inimitable sarangi and vocal work on “Hulu-Dane.” Listening to how effortlessly West African lyrics fit into this Indian-inspired track proves the global capabilities of open-minded artists. Underscored by Karsh Kale’s watery tablas (another return from the debut) and drum kit precision, his presence adds the rhythmic accuracy indicative of all Gigi’s recordings. His drums provide the beat structure for the entire record, as well as digital sound architecture built by New Delhi’s super-duo MIDIval PunditZ and former Brooklynite Skizz Fernando. On the lighter side, Gigi proves equally dexterous. In fact, her balladry may be this queen’s most admired quality. The light textures of “Jerusalem,” organ-led dynamics of “Salam” (thanks to ex-P-Funker Bernie Worrell) and “Utopia,” the only English language song here, call for a spaciousness allowing the listener to invest time and emotion. The back-forth between her classic Ethiopian dialect and more recent acquisition – she moved from Kenya to San Francisco at age 24 – expresses a hope for a unified people.

Perhaps this aural medicine can be attributed, in part, to her upbringing. The fifth child in a family of ten, Gigi was raised close to the Ardi River as her family irrigated coffee plant crops. Born in and of the land that spawned biblical folklore and, over two millennia later, Rastafarian savior Haile Sellassie, she is drawing her nourishment from one of the most important wells on this planet. In a land famous for pop stars Aster Aweke and Mahmoud Ahmed, Gigi’s plight has always maintained a different dignity. She was cast in a French production of Solomon and the Queen of Sheba, touring East and South Africa, winding up in France. Her globetrotting aspirations soon grew when she performed at a World Music Festival in Paris, sealing her future fate on stage. Upon moving to America and being linked to Laswell via Palm Pictures founder Chris Blackwell, Gigi was amazed at the sense of ease by which numerous and diverse musicians picked up on her native songs. Still, plenty of African musicians make their presence felt on Gold & Wax. Abesgasu Shiota and Moges Habte help out on organs, pianos and horns, while African percussion is led by longtime collaborator Aiyb Dieng. Assaye Zegeye provides the masinko, an Ethiopian style violin with a string of braided horsehair, and kirar, an ancient Ethiopian harp. Gigi keeps it in the family as well, inviting siblings Tigist and Teddy to join on backing vocals. The praise for Gigi was universal and unabashed. The Miami Herald rightfully called Gigi “Ethiopia’s gift to the world,” while The NY Times said the record was “full of unexpected angles and modal curves.” Her vocals, according to XLR8R, “sound sweeter than a cup of Ethiopian honey wine” (mead, the drink of the kings in the Bible), while the Village Voice agreed in saying she has “not just a luxuriously rich voice but an unassumingly cosmopolitan presence.” While all these accolades can be readily affixed to Gold & Wax, that latter summates much of what Gigi is, and is becoming, in the American eye: an ambassador of ancient sound with modern sensibilities, both a key to unlocking cross-cultural mythologies while hitting an eclectic range of music fans with a presence rare and sought after in this world.