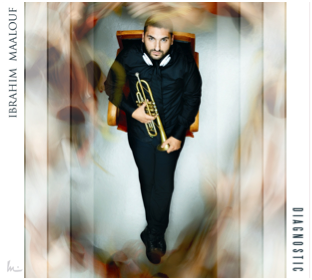 Lebanese/French trumpeter Ibrahim Maalouf is the go-to guy for everyone from Amadou & Mariam to Vanessa Paradis to Sting.

Diagnostic is Ibrahim Maalouf’s third album, and it forms the final chapter in a triptych which began with his albums Diasporas and Diachronism. Diagnostic is a magnificent conclusion to a cycle based on the search for an original aesthetic, one dominated by the four-valve trumpet and in which he traces his path through many universes: jazz, classical, world, rock, electro… and even rap, as shown here by the presence of Mali-born, French rapper Oxmo Puccino. This album completes an artist’s search for independence from genre constraints, in answer to a desire for unity and harmony. It also allows the musician to bring together all the sounds which have fed his imagination since childhood – whatever their origins: whether a nurturing orient or an emancipated west.

The closing Beirut pays a moving tribute to his country of origin, Lebanon, itself a torn extension of Maalouf’s family. An open, instinctive musician for whom technique necessarily serves feeling, Ibrahim Maalouf establishes himself here as a composer who, over time and through experience, has acquired mastery and assurance, both of which offer different kinds of freedom. "Nothing forbidden" was the golden rule which governed the recording of Diagnostic – meticulously orchestrated and feverishly ‘alive’. You can hear Ibrahim for the first time on piano, the instrument with which he began his musical career, and he also sings.

If the geographical epicentre of this record lies in the Balkans, whose exuberant, brass-band style the trumpeter borrows here, his travels also take him to Cuba, Latin America and even China… a nomad’s logic which also leads him to a piano introduction reminiscent of Chopin, an improvisation over a Michael Jackson theme in We’ll Always Care About You, or a stripped-down, ‘no complexes’ passion for heavy metal which Maalouf has preserved since adolescence. Inside this great whirlpool entwining his whole life in its vortex, Maalouf’s trumpet dispenses a thousand intimate emotions: anger, nostalgia, despair, euphoria… Blowing with rare intensity and exceptional depth, his horn articulates the pain and tenderness of the past, while bearing witness to the vast ambitions of a creator who has become a master of his discourse.

“Diasporas” reviews:
www.allaboutjazz.com “… ultimately uncategorizable but compelling music.”
Jazz Journal “… impressive debut set …”
Jazzwise “… in the lineage of the great Don Cherry though his debt to anybody from Oum Kalthoum to Massive Attack should also be recognised.“
Songlines ****
www.ukvibe.org.uk 4/5