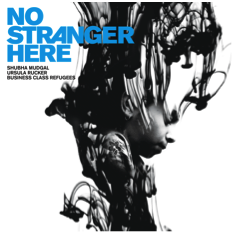 If you haven’t already received a copy and could use one please get in touch.
G x

As featured on Gilles Peterson’s Worldwide on BBC Radio 1

"No Stranger Here are beguiling and enchanting in equal measure, but also a bit bonkers. It’s easy to get melodically hypnotised listening to them as their strange brew is made to shift your consciousness, but there’s also a dark undercurrent in most of their work that rewards the listening experience with a heavy melancholy that’s addictive to certain souls…like me." Bobby Friction [BBC Asian Network]

In the middle of a rough year, Philly-based poet and spoken word artist Ursula Rucker opened an email that stretched back to the 16th century. It was an out-of-the-blue invitation from strangers, from two producers she had never crossed paths with, working on an album of songs based on the poetry of Kabir, an Indian mystic and poet, and woven around the sublimely precise, stunningly earthy voice of renowned Hindustani classical singer Shubha Mudgal.
She listened, felt the common thread, and co-created No Stranger Here a polyphonic, multifaceted tribute to love, earthly and divine. With Kabir as the binding tie, Rucker, Mudgal, and the Business Class Refugees (led by cross-cultural, genre-defying producers Patrick Sebag and Yotam Agam) render in lush sonic form the shared experience of alienation and longing. Balancing the elegant subtleties of Indian classical tradition, Western orchestral music, rich bursts of electronica, and Rucker’s insistent words, No Stranger Here flows from the universal sense of strangerhood, that mysterious alienation that haunts both our contemporary lives and echoes in centuries-old poems.

“We use silences a lot. The use of silences for punctuation is very important to what Kabir is saying,” notes Mudgal. “We really don’t know about him, what was actually written by Kabir and what was changed by his disciples. But by singing it today, we become part of a much longer continuum.” Rucker agrees: “Just being a poet, no matter how many centuries separate you, is a connection. I use other elements, but my work is really about God and love, even if you have to dig and read between the lines. It’s a continuing thread that goes throughout time.”

Kabir has the literary importance (and biographical mystery) of Shakespeare, but with an unrivalled spiritual significance, as part of the Bhakti (or “Devotion”) movement that pressed for spiritual renewal and broad human understanding for several centuries in India. Bhakti proponents eschewed the rigid ritualisation of religion, raising a radical call for love and spirit beyond human-made boundaries. Kabir, as both thinker and figure, leaps nimbly across faiths, caste, cultures: legend has it that Kabir was the son of Brahmins, but was raised by Muslim weavers. His spare, often blunt words have had a lasting impact on the Sikh faith and sparked a religious following that now numbers in the millions.
“Kabir is a major reference point for Indians,” states Sonya Mazumdar, EarthSync CEO and producer. “He had the ability to put these massive philosophical concepts in a way that the common person, who was denied education or had very simple ways for dealing with life, could grasp perfectly. Kabir equated the love between two people to the love between an individual and God. Composers down the ages have interpreted his depth and simplicity in various musical formats.”
Mudgal, a renowned classical performer known for her openness to taking musical risks, continued this long tradition of innovation based on Kabir’s works. Invited into EarthSync’s Chennai studios for a session, Mudgal found herself drawing on poets of the Bhakti movement, and especially on Kabir, as she laid down tracks in response to Agam and Sebag’s grooves. “Their tracks suggested a mood or tone, and I would look back on the poetry I’d been reading and take little bits from the poems,” Mudgal recalls. “Khayal, one of the styles I specialise in, uses phonetics to great advantage, and allows me to take a very tiny, 30-second composition and turn it into an extended exploration of pulse and sound. You can discover a lot as a musician, just in those few phrases.”
Agam, Sebag, and the rest of the Refugees—bassist Eval Mazig arranged the soaring orchestral parts—worked with Mudgal’s inspired improvisations—but realized that something was missing. Familiar with Rucker’s albums, they began dropping her voice onto a few tracks and realized she was it. Months of emails later, and Rucker, surprised by the invite and uplifted by its timing, crafted her own words and vocal tracks in response to Kabir and Mudgal’s. Unexpected, the dialogue unfolds beautifully: “Steadfast” weaves the meditative perfection of Mudgal’s vocal lines with Rucker’s gentle yet firm explorations of love’s many angles. “Seraphim Tones” moves through intense longing to prayerful gratitude and connection, as Mudgal flies over scintillating beats and Rucker sings and speaks with an immediacy that shows just how alive the tie between ancient poems and contemporary poet can be. To balance the Eastern elements and the Western orchestra, the distinctive voices of a highly trained singer and a respected wordsmith, Agam and Sebag drew guidance from the narrative thread suggested by the pieces. “We look at it like a film that has two major actors that tell the same story but each from his place and environment,” they note. “Every song is a different story and should leave room for everyone to tell their stories in harmony. That’s what music and collaboration is all about. That is what we love doing.”