Mahlathini & the Mahotella Queens & the Soul Brothers “Jive & Soul: The Very Best Of” 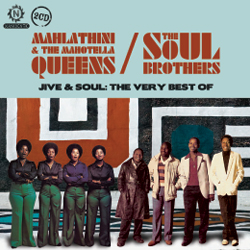 Compiled by that man John Armstrong

In the ‘world music’ boom of the late-80s the sound of South Africa was ubiquitous, with the Earthworks compilation series “The Indestructible Beat Of Soweto’ leading the way to Paul Simon’s Graceland and putting names to the artists and tracks that Malcolm McLaren lifted for 1983’s Duck Rock.

With “Jive & Soul: The Very Best Of Mahlathini & the Mahotella Queens & the Soul Brothers” DJ and compulsive CD compiler John Armstrong selects tracks epitomising a great era of South African pop and dance music performed by the cream of the crop. As John writes: “As with the selections for Mahlatini and the Queens, this compilation concentrates on the earlier rougher sound, which, to this compiler’s ears, displays the Soul Brothers’ limitless talents at their very best.”

The Soul Brothers’ trademark, party-starting, Hammond-led, twitchy funk takes up the whole of the second CD here while CD1 is left in the safe hands of Simon ‘Mahlathini’ Nkabinde aka the “Lion of Soweto” aka “King of the Groaners” whose basso profundo counterpoints the tangy harmonies of the Mahotella Queens.

Both groups emerged from the late-60s melting-pot of mbaqanga, but Mahlathini & the Queens stayed true to their deep kwazulu roots whilst the Soul Brothers introduced their passion for African-American soul, gospel and disco into the mix.

From mbqanga and mgqashiyo to soul, gospel and funk “Jive & Soul: The Very Best Of Mahlathini & the Mahotella Queens & the Soul Brothers” tells the odyssey of South Africa’s two most-loved bands.