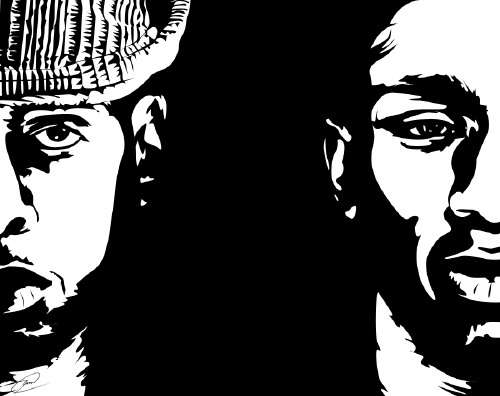 Rising from the thinking artist’s anti-violence brand of ‘conscious rap with a soulful vibe’, the bill for this once-in-a-lifetime show is a roll call of hip hop’s finest ever and most thoughtful talent. These universally respected artists share the stage to take us on a journey through hits that are lyrically and musically still streets ahead of anything out there. The songs are as relevant now as they were back in the day, and this show promises to deliver a timely reminder of Hip Hop’s ability to show the possibility of a better world.

Black Star’s Mos Def and Talib Kweli reunite for the first time in the UK since 1999 for one night only. De La Soul brings its snappy brand of old skool cool to the fore and Rakim – widely respected as one of the best rappers of all time – completes the line-up for this exclusive show. Unmissable.

Under 15s must be accompanied by an adult

Black Star
Black Star is a collaboration of emcees Talib Kweli and Mos Def. The title is a reference to the Black Star Line, the shipping line founded by Pan-Africanist, Marcus Garvey. The name Black Star brings to mind notions of Afrocentric pride. These notions are brought to fruition by messengers Mos Def & Talib Kweli. Mos Def was introduced on tracks by De La Soul and Da Bush Babees which placed him in line to carry on as part of the next generation in the Native Tongues movement. Together they came to form Black Star bringing intelligent rhymes, classic battle rap dexterity and uplifting messages.

De La Soul
In 1987, a trio known as De La Soul formed from Long Island, NY roots and changed the landscape of hip hop as we knew it. Now, for over 20 years they have rocked us with their De La songs full of inscrutable samplings, whimsically irreverent lyrics, social commentary, light rhythm and laid back rhymes. They have gained respect within and outside the hip hop community with their contributions to rap, as well as jazz, funk, soul and alternative genres. Not only are their musical innovations acclaimed and respected worldwide, but they paved a path for many alternative rap groups who come after them.

Their ’89 album ‘3 Feet High and Rising’ is an unquestionable Hip Hop masterpiece going beyond the standard sampling of James Brown’s “Funky Drummer” to include snippets from Hall & Oates, Steely Dan, Sly and the Family Stone and Liberace(!) and contained massive international hits with the likes of ‘Me Myself and I’, ‘Say No Go’ and ‘The Magic Number’.

Rakim
Universally referenced as one of the Masters of the Microphone and an influence and inspiration to his peers and followers alike, Rakim first exploded onto the scene with the release of iconic Eric B. is President in 1986 with long time collaborator Eric B. The single marked a turning point in the Rap world – raising the bar for future emcees and revolutionizing the way rhymes are delivered to this day. No serious discussion of the music’s greatest performers is held without a deferential accounting of his achievements, and no serious rap artist grips a microphone without channelling some of his legend.

With recent tributes such as NAS’s U.B.R., collaborations including Alicia Keys’s New York State of Mind, a Platinum Edition of Paid In Full and his newest LIVE album “The aRchives: Live Lost and Found” keeping the world’s eye on the one many call GOD, Rakim Allah prepares to reset the standard again.