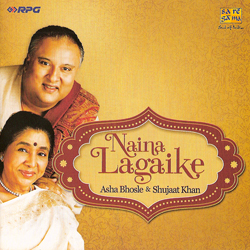 Asha Bhosle is without question one of the world’s superstars even if all you know about her is Cornershop’s Brimful of Asha. Naina Lagai Ke (‘I Regret The Time We Locked Eyes’) is the new album that sees Asha Bhosle collaborate with a classical musician for the first time in 14 years. In 1996 she worked with Ustad Ali Akbar Khan on an album titled ‘Legacy’ that was nominated for a Grammy Award. This time round she combines forces with Shujaat Khan, son of the legendary Ustad Vilayat Khan on an album that defies genres.

The songs draw from traditional music and were recorded live in the studio with three musicians, putting all the focus on the singing. The result is a showcase of Asha Bhosle’s supreme versatility and talent, as it is for Shujaat Khan’s exceptional voice and masterful sitar playing.

In the words of Asha Bhosle and Shujaat Khan “it’s been a wonderful experience recording with each other because we come from different schools of music and each of us has had to adapt to the other’s style. The marvellous part, really, was that we recorded the music and vocals live, something that hasn’t been done for years and years. We throw little vocal challenges at each other and this game of one upmanship has resulted in some beautiful vocal renditions…we are really proud of the effort!“

To celebrate the release of this unique album Saregama Events are bringing the legendary Asha Bhosle and sitar virtuoso and vocalist Shujaat Khan to the UK in March 2011 to perform ‘Naina Lagai Ke’ to UK audiences. Expect a wonderful evening of light traditional Indian music with beautiful poetry, melodic songs and some evergreen hits of yesteryear.

Asha Bhosle is one of the greatest artistes in the world and was recently chosen among musicians like Michael Jackson, the Beatles and Elvis Presley as one of the most influential artistes ever. She has sung in over 18 languages, recorded over 12,000 songs, collaborated with musicians across the world from Michael Stipe of R.E.M. (on the 1 Giant Leap project) and the Kronos Quartet to Boy George and Code Red, has had international songs written about her (‘Brimful Of Asha’ by Cornershop) and has been nominated for a Grammy award twice. Asha’s album ‘Precious Platinum’ was ranked among the Top 100 World Music Albums by Amazon.com last year. At the age of 77, she continues to tour the world in concert after mind blowing concert and never ceases to astonish listeners with what she comes up with next. The most recent example being her performance at the recent GIMA Awards in Mumbai, of which she is also the Goodwill Ambassador.

Sitar player and vocalist Shujaat Husain Khan is the son of the legendary Ustad Vilayat Khan, arguably India’s finest sitar player. “Master musician, a living legend, best classical musician of his generation”… are some of the ways Shujaat has been described and in 2004, he was nominated for a Grammy award in the World Music category for his album ‘Rain’ with the Ghazal Ensemble. He is also one of the artistes who have made it to Amazon.com’s 100 Greatest World Music Albums of all time.

About Saregama PLC:
Saregama PLC, UK is a subsidiary company of Saregama India Ltd, formerly known as The Gramophone Company of India Ltd., India’s largest and best-known music recording company. The Company has been intimately associated with the development of Indian music from the time the first recording was made on Indian soil in 1902.