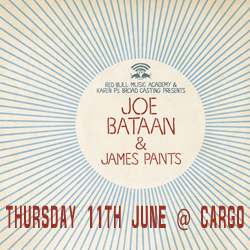 On Thursday 11th June Red Bull Music Academy will be joining forces, once again, with Karen P’s Broad Casting to bring you a night truly representative of The Academy. Celebrating the launch period for 2010 applications the nght will see a unique collaboration between Stones Throw’s James Pants and Latin soul legend Joe Bataan to be recorded live and exclusively for Red Bull Music Academy Radio.

Red Bull Music Academy has built a worldwide reputation as one of the most inspiring processes an artist can experience. For 10 years it has brought together a fustion of artists and built a fan base of musical icons across the gobe. The next 12-months wil see Red Bull Music Academy make its mark on the capital city with plans now confirmed to host the main event here in 2010.

Unbelievably this will mark Joe Bataan’s first EVER UK performance and he was James Pants’ No.1 choice when asked of his perfect collaboration

‘Joe Bataan has got to be the most on-point artists in the game, and someone I have a tremendous amount of respect for. Latin soul, salsa, rap-o-clap-o, lowrider ballads, and funk with a career spanning forty years… How many people can pull that off!? I look forward to busting down some deadly cowbell for this show.” James Pants, April 2009

Both men have been guest lecturers at Red Bull Music Academy before – Joe Bataan in Melbourne and James Pants in Barcelona 2008. As artsists from different generations, genres and parts of the world, coming together to create unique music, their collaboration is what both Broad Casting and the Red Bull Music Academy are all about and is set to be an historic and memorable evening at London’ Cargo.

A collaborative project across two generations of HIp-Hop, Willie Isz will also fit perfectly into the Broad Casting ethos. Jneiro Jarel, is a Red Bull Music Academy past-participant (also known as Shape of Broad Minds and Dr Who Dat), and has been cited as an influence by Mos Def and Flying Lotus. He’s currently working with TV On The Radio who also appear on the new Willie Isz album. Khujo Goodie is one quarter of the legendary Goodie Mob, which also includes Cee-Lo Green (Gnarls Barkley) and form part of The Dungeon Family along with the now stratospheric Outkast. That spaced out, soulful Atlanta inspired sound runs through the heart of what Willie Isz are all about, and a great addition that Lex have chosen Broad Casting as their UK launch party.

In true Broad Casting style, there are – of course – bound to be a few additional surprises in store by the time the night comes around so watch this space for more news…

Biographies: Joe Bataan and James Pants
Artists don’t come with more credentials than Joe Bataan, who anticipated the disco movement with his ‘latin soul’ sound, had one of the first ever charting rap records (in 1979!) and who’s ‘Salsoul’ album gave the seminal disco label it’s name. In fact Bataan’s cover of Gil Scott Heron’s ‘The Bottle’ is now considered one of disco’s earliest hits, putting this effervescent performer ahead of the curve on the two most important musical genres to have emerged out of New York City.

Growing up in Spanish Harlem, Bataan ran with Puerto Rican gangs before he turned his attention to music. A self-taught pianist, his first record ‘Gypsy Woman’ was a Fania hit on the New York latin market, despite the fact that Bataan sang the lyrics in English. He continued to break down barriers by fusing Afro-Cuban, Brazillian and Orchestral Funk on his Afrofillipino and Salsoul LPs. Widely hailed as the inventor of the Latin Soul genre, Bataan can no doubt also be considered one of the originators of Disco itself and we are privileged to be on the receiving end of this great man’s UK debut.

In 2001, Stones Throw label boss Peanut Butter Wolf was DJ-ing at a High-School prom when he first met James Pants. Sharply dressed and with his prom-date in tow, James approached the DJ booth and formally introduced himself to one of his heroes. Not long afterward, he was offered an internship at Stones Throw which turned into every young beat-freak’s dream when Wolf signed him as an artist.

A multi instrumentalist, long-time record fiend and all round embracer of the leftfield groove, James’s musical passions are infinitely diverse, taking in 80’s soul, early rap, electro boogie, disco, new wave, and even new age! His debut album ‘Welcome’ somehow reflected all of these influences whilst still maintaining its own unique and distinctly fresh vibe – a healthy dose of which he will no doubt be bringing to Broad Casting when he sings and plays keys, drums and guitar with one of his musical heroes.

The Other Players
James Pants and Joe Bataan will perform tracks from both of their repertoires and will be joined on stage by musicians from the UK’s foremost Latin Jazz and Salsa outfit; Grupo X. Formed by trombonist/composer Jonny Enright, Grupo X combine the raw-edged sounds of ‘60s and ‘70s Latin New York with more contemporary dance-floor influences. Tracks from their two studio albums have been spun by world renowned DJs including Louie Vega, Gilles Peterson, Osunlade, Bobbito Garcia, Rainer Truby, Nicola Conte, Jazzanova and Snowboy. They have also had the privilege of backing Latin music legends including Jimmy Sabater (Fania Records), Frankie Morales (Tito Puente Orchestra), “El trombón criollo,” Jimmy Bosch, and “Mr Bongo,” Jack Costanzo. Nevertheless they are chomping at the bit to get behind one of their all time heroes, and mix things up a little with Mr Pants.

Broad Casting with: Mulatu with The Heliocentrics

Broad Casting with: Tony Allen with The Hypnotic Brass Ensemble