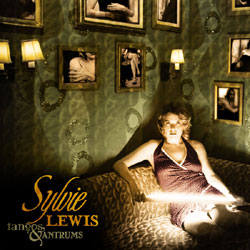 Sylvie’s “Tangos & Tantrums” was one on The Word’s Top 10 CDs of 2005 and the follow up is teased into being in LA as I write. The new album is due early in ‘07 and there should be some Autumn shows to tell you about soon…

Despite the fact that there is currently a surfeit of female singer/songwriters, London-born, Los Angeles-based Sylvie Lewis stands out as something extremely special – her songs of love and loss and their sweet and sour poignancy allied to intelligence, wit and indestructible, imperious melodies.

Sylvie’s songs have a timeless, crafted quality which helps hook them into your soul. If you are touched by melancholy with a twist of wry humour; admire powerful women with powerful urges; enjoy both the evening before and the morning after Tangos & Tantrums is for you.

Sylvie is inspired by relationships and travels in her own life – she’s lived on three continents and speaks four languages – she has experienced first hand how universal the theme of love is. She explains further: “All my songs are about longing. It is the immigrant aspect of Tango that I connect with most.”

Tangos & Tantrums was produced by Richard Swift and mixed by Bob Ezrin (Pink Floyd, Alice Cooper, Lou Reed), and is sensual and literate, innocent and knowing.

On Tangos & Tantrums, with textures provided by a palette of Wurlitzer organ, trumpet, flugelhorn, harmonica, Mellotron and harp, plus large portions of acoustic picking and piano; characters come to life in a variety of settings from jazz inflected ballads to tango-flavoured torch songs.

Now tell me, when you last hear a collection of songs as memorable and accomplished as these?