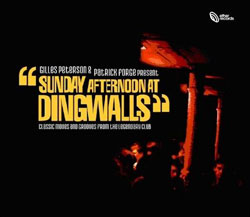 The session took place on Sunday afternoons, kicking off at 12.30 and skipped, bumped and body-popped through until 6.30pm. For most of that time there was no bar and the music policy ranged from to bebop to hip hop by way of afrobeat, funk, latin, modal jazz, soul, latin jazz, future jazz and acid jazz. This was Dingwalls (so called) and it ran from October ‘86 the March 3rd 1991 and “Sunday Afternoon At Dingwalls celebrates the 20th anniversary of its beginnings. Patrick Forge and Gilles Peterson reigned supreme in the raised DJ box positioned towards the middle of the room facing the stage and a DJ posse would congregate there: Roy The Roach, Baz Fe Jazz, Marco Nelson, Kevin Beadle, Joey Jay, Marco Santucci adding to the atmosphere of soulful high jinks.

The Reverend Patrick Forge puts the record straight and joins all the dots:

“Talkin’ Loud and Saying Something”, or just “Dingwalls” as it was more commonly known, was the session that shaped a generation, in sound, style and attitude; it’s influence spread far and wide. It was the counterpoint to the rave generation’s acid revolution, taking that same spirit and optimism and applying it to a very different music. It built on the legacy of the Electric Ballroom and the jazz-dance scene that had been bubbling away since the early eighties but took things to a new level. It became the touchstone for everything that followed in its wake, acquiring near legendary status, tempting folk to later claim “I was there” whether they were or not. It was inspirational, revolutionary, celebratory and radical. It was a family, it was a congregation. It was our Paradise Garage.

Running from Sunday lunchtime until 6.30pm we featured a live act almost every week. Doors opened at 12.30pm, and until the band came on the session was dedicated to the dancers. Gradually they’d filter in, warm up and get loose. During that first hour or so I’d have the chance to play less obvious music, spiritual jazz, mellow vibes, modal tunes, stuff that strayed from the obvious 500mph fusion and Latin bangers that the dancers traditionally loved. As the number of dancers swelled the music would grow in intensity. Different groups of dancers preferred different styles so it was important to mix up the rhythms, and contrast the mad percussive work-outs with more melodic material, mixing rhythmic and harmonic intensity. I would get an incredible high from the energy coming off the floor, the athleticism and grace on display would leave me breathless but inspire me to push the vibe even higher or find the right tune to spin off in another direction. It was just a joyous feeling to be in that DJ box on a Sunday afternoon playing this beautiful, crazy music to dancers who could interpret its every nuance: they called me “the reverend”.

Then the band would come on. For some this may have been the highlight of the afternoon, but whenever a live act failed to ignite the atmosphere it was obvious that for the majority, it was the records that really mattered. However some of those live shows were unforgettable: The JBs, Roy Ayers, Dave Valentin, Poncho Sanchez who we managed to divert to Camden after a North Sea Jazz festival; the eternally hip Mark Murphy, the mighty Mongo Santamaria to name some of the U.S based artists who performed for us. Then there was the acid jazz generation of home-grown talent, the Brand New Heavies, Galliano, JTQ et al. Dingwalls also brought about the renaissance of British jazz-funk pioneers Incognito, and we gave a platform to generation of U.K. jazz talent, Courtney Pine, Cleveland Watkiss, Ed Jones, Orphy Robinson and many more.

And then there were the artists who just passed through to witness what was going on. It was not uncommon to find a notable jazz artist in the DJ box sagely nodding away, soaking up the atmosphere. Or it would be the new school – Gang Starr famously dropped in one afternoon. Of all the artists who came but never played, perhaps the most significant for us were Airto and Flora Purim who’d always been inspirational and talismanic figures for the scene. They stood there with tears in their eyes, as Gilles ripped through a selection of their classic tunes, the crowd giving pure love, the dancers stretching every sinew to show their appreciation.

I would work the lights for Gilles, there was a control unit in the DJ box that I never fully understood but somehow learnt how to use. For most part the lights would be dim and subtle, but we weren’t averse to the odd strobe effect when the intensity reached a peak, and we would often co-ordinate plunging the dance-floor into darkness at the end of a track so Gilles could play a long moody introduction, or just something totally atmospheric. We liked a bit of drama and we liked a few peaks and troughs. Gradually by working the obvious with the obscure, the tough and the mellow, the old and the new, Gilles developed the crowd to respond to deeper and deeper music; modal jazz in waltz time and everyone’s grooving to it, totally nuts and just beautiful. The session would always wind down into a more soulful vibe. It’s one thing to leave a crowd wanting more; to leave them smiling and wanting more because they’ve just shared a few special tunes with some wicked people, that was Gilles at Dingwalls. At the end we would roll out of there happy, delirious, sweaty, intoxicated, in love with the music.

Like any great club the real strength of the session was the punters themselves. So who were the Dingwalls generation? Post soul-boy suburban meets post rare-groove inner-city, hardcore jazz dancers from far and wide, “acid teds” coming down from a night at Shoom or Sunrise, progressive mods and boogie boys, head-nodders from Harlesden and Hackney, beatniks and proto beat-heads. A vast melting pot of refugees finding a home in a club that was far removed from a scene increasingly dominated by house music. Then there were those who’d obviously just stumbled in from Camden Market and become immediately infected by the spirit of the session and thrown themselves into the fray. It was like that, anybody was welcome and although the place was littered with a myriad of styles and tribes, the only thing that really mattered was the music.

Conspicuous because of his outrageous Cotton Club / chicken shack style, Jude “the jazz tailor” was one of many characters that made Dingwalls so special. We were blessed with so many creative and colourful personalities adding to the club’s vibe and spirit. Jalal one of the original Last Poets would often be hanging out with us, they were crazy times and there was no shortage of wild and wacky people turning up. Then there were the regulars who we’d christen from the DJ box before we ever talked to them, like the girl we called “Bondacious”. However one personality who was absolutely crucial to proceedings was Janine, for not only did she promote and run the session, she also embodied it’s spirit with her boundless energy both on and off the dance-floor: not to forget her supply of diet Coke that she’d bring with her and hide in the d.j. box that inevitably Gilles and myself would delve into later on. Even those who worked for the venue were memorably quirky, our resident sound engineer JP with his leather jacket and cowboy boots but who loved the jazz, Mark the gay goth who ran the bar and would clear us out of the venue at the end by playing his Cure records. Last but not least, Joe Strong the manager, a classic rough diamond Geordie who would constantly take the piss but came to understand the session, and had a tear in his eye with the rest of us when the curtain came down.

The last ever session on a Sunday afternoon at Dingwalls produced a queue that snaked from inside the market to half-way down the high street, we could have filled a venue five times the size. By that time there was a sense of history being made, we knew we’d been lucky enough to have been part of something very special. Incognito provided the finale with Jocelyn Brown singing Always There and bringing the house down, setting the vibe for a session that maintained a fever pitch of emotional intensity until the last bars of “Family Affair” faded and I picked up the seven-inch and spun it into a sea of hands.