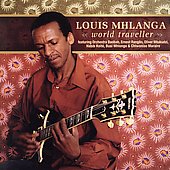 Louis Mhlanga makes his live UK debut at the Wychwood Festival on 3rd June and his London debut at *Momo on 14th June with his South African trio. Read Louis’ full biography here.

Louis Mhlanga, the “African Axe Man”, is an exceptional Zimbabwean guitarist, now based in South Africa, and “World Traveller” is his first UK release after a notable career flitting between African forms and the smoother end of Jazz. One minute on a “Rumba All The Way” trip with Senegal’s finest: Orchestra Baobab; the next “Spreading Some Love”, and trading phrases, with the similarly inclined Jamaican guitar legend, Ernest Ranglin.

These guests, and their eagerness to participate with him in making music, are part testimony to Louis’ amazing talent as an individual and artist. His tangible enjoyment and virtuosity as he wields his magic on stage are events to behold.

Louis investigated and studied both the Southern and West African Guitar traditions intensively. He has translated the traditional Mbira (thumb piano) patterns of the Shona peoples into a unique way of interpreting and playing the guitar in an eclectic, modern and unique way.

This album stands as testimony to a great talent, a milestone in a long career spanning decades. It attempts to both feel and expose the essence of Louis through some of his many musical adventures with a sprinkling of the moods and various flavours and spices that he encountered along the way, and now imparts to us…

Born 10/10/1956 in Harare, Zimbabwe, Sohapi Louis Mhlanga started playing the guitar aged 10 laying down licks from the likes of Jimi Hendrix, The Beatles, The Rolling Stones, Led Zeppelin, Deep Purple and other such mainstream rock bands that dominated airwaves and held massive influence in the Zimbabwe of the late sixties and early seventies.

Besides these Western influences, however, through personal life experience in Zimbabwe as well as through exploration via radio broadcasts, Louis investigated and studied both the Southern and West African Guitar traditions intensively. He has translated the traditional Mbira (thumb piano) patterns of the Shona peoples (who have played this ancient and spiritual instrument for over a thousand years) into a unique way of interpreting and playing the guitar in an eclectic, modern and unique way.

Louis Mhlanga’s playing is amazingly crisp and precise, his tone clear and bright; while his melodic feel and superb sense of timing make him a true master on the instrument. His manner of strumming and picking, all are distinguishing factors that separate him from other guitarists. This mastery combined with a deliberate yet delicate singing voice and great compositional skill defines what it is that makes Louis a true genius able to expresses his shining personality through sound.

During the course of his extensive career Louis has worked, collaborated and recorded with a number of accomplished and recognised musicians. One of the most formative of these was King Sunny Ade, with whom Louis worked in Lagos as band guitarist and also as producer for some of Ade’s offshoot projects. These almost ten years of solid experience proved to be a great starting point and a solid base for his ongoing musical journey.

Louis produced Vusi Mahlasela’s fourth album in 2000, collaborating and featuring on it as well. As a precursor to that the duo toured together for over a year and also recorded – “Vusi and Louis, Live at the Bassline” [1999] (one of Johannesburg’s most respected music venues).

1998 saw Mhlanga travelling to Europe to give workshops at several conservatories to teach his Mbira transferred material to students. There he met Double bassist Eric van der Westen with whom he recorded the awesome “Song for Nomsa” [1999]. It was the first time that Louis could be heard in such a spacious acoustic setting. The song “Zvinoshamisa” from that album was selected as the soundtrack of a video clip produced by Education International and NOVIB for their ‘Global Campaign Against Child Labour and The Right for All Children to Education’.

Louis’ handiwork is to be found on another album called “Place of Hope” collaborations with George Duke, James Ingram, Al Jarreau, Diane Reeves amongst many others. Also to be heard on Andy Narell’s; ”Fire in the Engine Room” album, and ‘Live in S.A.’ following his South African tour.

Louis has recorded some great work under his own name – his first solo album “Mukai” [2000] and a self-titled album with “Music Ye Afrika” [2001], put him on this map in a major way.

‘The Louis Mhlanga Band’ came into being in 2001, featuring formidable local Jazz music heavyweights Andile Yenana (keys), Denny Lalouette (bass), Sello Montwedi (drums) and Basi Mahlasela (perc). They were invited by SAfm (one of South Africa’s national radio stations) to perform at the National Arts Festival in Grahamstown. The recording in July 2001 resulted in the release of “Shamwari”, Louis’ debut album on the Sheer Sound Label. This album went on to win him much critical acclaim and further public support.

Through this connection with the Netherlands, Louis came across less common ground when he started to play in a jazz setting with the famous Dutch jazz group “The Paul van Kemenade Quintet”. He recorded the album “Zvinoshamisa” with them (containing the title song of course) and toured The Netherlands in 1998, 1999 and 2000.

Louis’ outstanding feel and touch have taken him all over the world. He has performed at major festivals like: The Sunsplash in Austria, Music Metisses in France, Rudelstadt in Germany, Masa in Ivory Coast, Dranoufer in Belgium, Tribute concert for Princess Diana in England, Stranger than Paranoia and Mundial in The Netherlands to name a few.

Louis featured prominently on and in Paul Hanmer’s smash hit “Trains to Taung” [2001], which continues to sell well to the present day and features some of his greatest jazz work.

Louis also features as part of the 2002 Sheer All Stars’ release “Dance with Me”. The Sheer All Stars is a concept originated by Sheer Sound MD Damon Forbes, aiming to incorporate some of the finest South African jazz musicians as a working band. As the name suggests the make up of the band is indeed star studded. The individual members all have impressive pedigrees, each with several solo recordings.

The Sheer All Stars and the album “Dance with Me” received three nominations for the 2003 SAMAs (South African Music Awards) and managed to scoop two of these in the categories: Best Contemporary Jazz Album and Best Engineer.

Musik ye Afrika, another concept/band, is the brainchild of Louis Mhlanga, and his long-time friend and colleague, Jimi Indi (unfortunately original band member and pivot of the trio Jethro Shasha is no longer with us). Mid-2003 saw the release of their second album, “United We Stand”. A tribute to the high esteem in which he is held by his fellow musicians was evident from the calibre of artists who agreed to give their time to go into studio with Louis and Musik ye Afrika – artists like Oliver “Tuku” Mtukudzi, Busi Mhlongo, Chiwoniso Maraire, Marcus Wyatt, Bushy Seatlholo and Sydney Mnisi, amongst others. An album of wide scope and compositions, “United We Stand” is a journey through many styles, sounds and experiences of the Continent.

“Tinganekwane” (stories) [2004] saw more of Louis’s African side being exposed with a revisiting of traditional patterns and flavours from Zimbabwe interspersed with his usual surprises (such as the acoustic gem “What the Future Holds”. The album was nominated for a SAMA award for “Best Male Artist” in 2005.

Louis has set up a studio over the past few years, aptly named “Joy Studios” where he both records and produces material for other bands and artists.

That takes us to the present day and the release of “World Traveller”, a milestone of recognition to an awesome talent who’s career is in no way ending, but in many respects merely beginning…