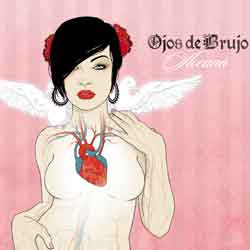 on tour – with support from

“If the mark of a great band is that they make excellent albums but sound even better live, then Ojos de Brujo are indeed a great band”. The Guardian ****

The above quotation above refers to the band’s show at London’s Roundhouse in May and the excellent news is they’re back and coming your way with what Straight No Chaser once described as “… an elemental force: a caravan of colour, sound and movement…”

May’s show was their first in the UK for 2 years having taken time out while singer Marina had her first child, which in turn influenced their approach to the recording of their latest, much praised CD, Aocaná.

“… Ojos de Brujo have taken up where they left off, with even more panache and enthusiasm”. The Guardian ****

One of the reasons that OdB are the most visible and successful of Barcelona’s acclaimed mestizo (fusion) scene is that they embody it; taking the sound and look of Barcelona’s more culturally mixed neighbourhoods and bringing them to life courtesy of their own great musicianship and spicing the whole mix with acute social commentary, vividly presented on a bed of cajon, tabla,and sabor-filled flamenco guitars, with a tasty side order of scratchismo, but never forgetting that they have an audience to entertain, which they do with gusto: the live show featuring projections, live flamenco dancers and 10 or more musicians.

Ojos de Brujo (Wizard’s Eyes) have appeared at Glastonbury, The Big Chill, Womad and Lovebox; won a BBC Radio 3 Award for World Music, a Latin Grammy for Techari and appeared on Later with Jools Holland.

OdB will be joined on this tour by La Troba Kung-Fú who return after making their UK debut at this year’s La Linea festival and are another fine example of the remarkable musical mixing that continues to emerge from the barrios of Barcelona. They are led by singer and accordionist Joan Garriga, heavily influenced by Colombian Cumbia, seasoned by rock and reggae and deliver a manic and electrifying live show.

A night out with musical magpies who between them bring the heat and high spirits of Barcelona with influences from Colombia, India, Cuba and beyond which will no doubt be especially welcome as the evenings draw in.

This special double bill tour is presented by Music Beyond Mainstream a consortium of venues presenting exactly what it says on the tin, and La Linea – The Latin Music Festival which has been producing new Latin music in venues across Central London every April since the dawn of the millennium.

For public information on the whole tour please visit www.musicbeyondmainstream.co.uk and www.comono.co.uk